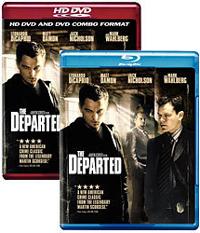 While it wasn't too long ago that Tom Cruise was jumping off couches after finding out that Mission: Impossible III broke all sorts of HD disc sales records, it looks like there's a new champ in town. Warner Home Video has proudly announced that The Departed has sold over 100,000 units during its short stint on the shelves, making it arguably the largest selling high-definition movie to date. It should come as no surprise that the press release is mum when it comes to HD DVD vs. Blu-ray numbers, but it did suggest that supporting both formats seemed like an amicable solution to appease both camps. So, any guesses as to which format strengthened the final figure most?

In this article: blu ray, blu-ray, bluray, business, departed, format war, FormatWar, hd, hd dvd, hddvd, sales, the departed, TheDeparted, warner, warner home video, WarnerHomeVideo
All products recommended by Engadget are selected by our editorial team, independent of our parent company. Some of our stories include affiliate links. If you buy something through one of these links, we may earn an affiliate commission.
Share
Tweet
Share