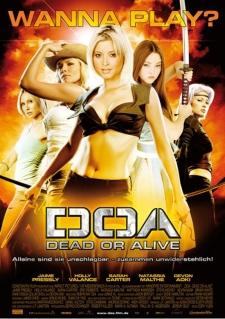 After what seems like a lifetime in development, direct-to-DVD speculation and a dismal 18th place opening last weekend, we thought things couldn't get much worse for the Dead or Alive movie. But we were wrong. Dead wrong, if you will.

This weekend's box office numbers show earnings for the movie dropping off an incredible 91.9 percent to just over $21,000. Total. For the whole country. For reference, top-earner Evan Almighty made that much off just three of its 3,604 opening screens. The 54th-most popular movie for the weekend, DoA was shown in just 98 theaters, earning an average $214 per screen. For even more context, action flick 300 was shown in 140 theaters and averaged $737 per showing despite being four months old.

Granted, DoA was a low-budget popcorn flick with no big names attached and next to no advertising. Still, what does this unmitigated flop say about the prospects of other upcoming, game-based movies like Prince of Persia or Spy Hunter ... or Metal Gear Solid or Diablo ... or City of Heroes or The Sims? They can't all be Tomb Raider, after all.

In this article: box office, BoxOffice, Dead-or-Alive, doa, flop, gross, movie, tecmo
All products recommended by Engadget are selected by our editorial team, independent of our parent company. Some of our stories include affiliate links. If you buy something through one of these links, we may earn an affiliate commission.
Share
Tweet
Share