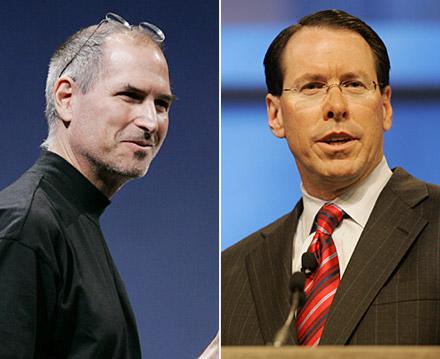 USA Today wasn't the only publication to get some alone time with Steve Jobs and Randall Stephenson yesterday, Wall Street Journal has an interview of its own up this morning, with Jobs at his most candid -- which really isn't saying a lot. Most pressing on the mind of hundreds of uber-fans across the country is the kind of supply Apple will have available today. Steve didn't spill any numbers, but he confesses that "We're building a fair number of them, but we may not [meet demand]... We've taken our best guess but it wouldn't surprise me at all if it ain't enough." Let's just hope it's not the riots in the streets brand of not enough. Mr. Jobs and Mr. Stephenson also touched on some other interesting topics, with Steve talking with a particular bent toward corporate America, comparing the EDGE speed of the iPhone to a BlackBerry: "You know every (AT&T) BlackBerry gets its mail over EDGE." He also expects a slew of third party corporate apps, saying: "I think the majority of applications people are going to write for the iPhone are going to be things that corporations like." Steve and Randall also seem to be particular fans of WiFi-based VoIP, and while the iPhone certainly isn't supporting that out of the box, it seems like it could be a big thrust for Apple and AT&T going forward.

[Via InfoWorld]
In this article: apple, atandt, att, interview, Interviews, iphone, mobile, randall stephenson, RandallStephenson, steve jobs, SteveJobs
All products recommended by Engadget are selected by our editorial team, independent of our parent company. Some of our stories include affiliate links. If you buy something through one of these links, we may earn an affiliate commission.
Share
Tweet
Share