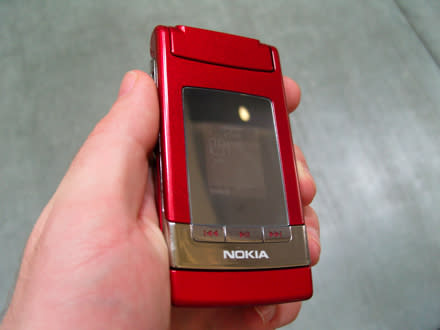 Until just very recently, the terms "smartphone" and "fashion" seemed doomed to travel very different paths, never to intersect -- not in a product consumers could actually get their hands on, at least. As carriers and customers demand that their mobile companions become ever more featureful, though, the line separating high-end dumbphones and full-out smartphones bends, then bends some more, then finally breaks, leaving a clear-cut market for ultra-stylish open platform devices in its wake. There will always be buyers ready and waiting for handsets like the RAZR 2 and the Shine, but when Joe and Jane Businessperson are looking to open Word documents by day and get noticed in the bar by night, something's gotta give. Enter the N76, Nokia's first truly fashion-friendly "multimedia computer" (to use its own terminology). Though Nokia's never shied away from trying unusual, different, and daring designs in its volume handsets, its S60 lineup has typically been left buttoned up. To be fair, features like 5 megapixel cameras, giant screens, and WiFi -- all frequent flyers on the Nseries -- don't lend themselves to svelte, gorgeous shells, but you don't necessarily need any of that to make a decent smartphone that can do double duty as face candy and as a professional sidekick.

In light of that impetus, think of the N76 as Nokia's way of saying, "yep, we hear you, and we're trying." It's far from perfect, but it's a noble first effort and we think a really promising indicator of things to come out of the company. On the plus side, the N76 is thin (by far the thinnest S60 flip ever), it's available in two colors that never really go out of style, and it's clad in mirrored accents that arguably give it a classy touch. On the downside, the fit and finish necessary to really pull off this kind of look isn't there, we imagine simply because Nokia isn't used to making phones that look and feel like this. In particular, the etched metal keypad was a bit wonky -- pressing keys in the 7-8-9 row frequently yielded characters from the *-0-# row. We eventually figured out that we could guarantee a good press by pressing the very tops of the 7, 8, and 9 keys with just our fingernails, but it was an annoyance we're not sure we'd want to deal with in a full-time phone.

Other details befitting a true fashion phone weren't quite there, either. For example, we were provided with the red model but the USB port cover and power button were both black, making them look a little out of place. Also, the battery cover and SIM slot among the strangest we've ever seen; both require a fairly delicate touch to engage correctly without damaging the surrounds.

Out front, anyone already familiar with the N75 will feel right at home with an identical display (large, bright, and colorful, may we add) and music controls that double as soft keys for basic navigation operations without having to open the flip. When the backlight's off, this secondary display becomes invisible underneath the mirrored cover -- cool, yes, but we'd occasionally find that the backlight wouldn't power on, forcing us to either squint and position the phone at an odd angle to make out the display or give in and open the flip. We suspect it's a software bug of some sort; cycling the phone's power fixed the problem every time.

Speaking of software, the N76's is pretty much what you'd expect to find on any modern S60 3rd Edition Feature Pack 1 handset, and with it, you get all the same benefits and pitfalls. The browser is truly world-class (but its usefulness is tempered slightly by the lack of American 3G) and Quickoffice comes preinstalled. We perceived the N76 to be very slightly quicker opening apps and navigating around than the N75 was, though we'd say the difference is negligible.

Add in the lack of WiFi and the lackluster fixed-focus 2 megapixel camera and we'd say Nokia made some tough compromises to pack all that S60 action into a razor (and RAZR) thin shell. For some, that compromise is going to be worth it, even at the unit's stiff $500 sticker. For everyone else, the N76 hopefully serves as an encouraging glimpse into the next generation of Nseries superphones -- a glimpse that is better left admired from afar.
In this article: edge, features, gsm, hands-on, mobile, n76, nokia, review, symbian, umts
All products recommended by Engadget are selected by our editorial team, independent of our parent company. Some of our stories include affiliate links. If you buy something through one of these links, we may earn an affiliate commission.
Share
Tweet
Share