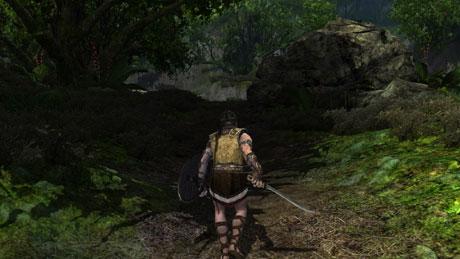 When playing an MMORPG, you're essentially waging a war against the mind-numbing effects of repetition. There's no way to avoid it in a genre that's less concerned with immediate interaction than it is with protracted character building and management. The crucial trick in creating a good MMORPG then, is to bury this almost mechanical repetition in enough layers of entertainment and atmosphere to convince you that you're plundering loot from a defeated swamp creature, and not a polygonal mass of lesser statistics. World of Warcraft is demonstrably such a game and judging by our brief time spent with it, Funcom's Age of Conan: Hyborian Adventures may be as well. Don't misunderstand -- it's not going to radically change your feelings towards MMORPGs, but it may prompt you to consider getting your hands dirty.

Indeed, getting your hands dirty is arguably one of Age of Conan's most prominent features. Being based on Robert E. Howard's Conan the Cimmerian novels (sorry, Arnie fans!) naturally gives the combat a barbaric edge, with the ability to string together attack combos resulting in a greater sense of immediacy and involvement compared to other titles in the genre. It's not quite an action RPG -- statistics still play a predominant role -- but you are given a variety of physical attack options through a set of on-screen buttons. A smartly executed combo will finish off weakened foes with a fatality animation and a satisfying splatter of blood across the screen.

Of course, you don't have to play as a barbarian (or "tank" as you RPG kids say), but choosing differently will somewhat lessen the authenticity of the game's drunken brawling (which is exactly what it sounds like). Other character classes obviously bring their own aesthetics and abilities, with an efficient raiding party consisting of classes skilled both in magic and brute force. The E3 raiding party (rendered somewhat schizophrenically due to the Fairmont hotel's woefully inadequate internet access) consisted of a barbarian, a priest and a master of beasts (said summoned beasts tended to be frighteningly large scorpions). The combined might of the trio was able to foil a huge creature hidden deep inside a vast and ancient (aren't they always?) temple, though some leveling up cheats were clearly in effect. Don't worry Funcom folk, we didn't think less of you.

As evidenced by the temple and a set of snow-covered ruins, the sense of environmental scale in Hyboria is quite impressive. Old architecture is nestled within craggy mountains and obscures a considerable draw distance. We could certainly see where some of the game's $25 million budget and 4-year development time went. Not seen -- but scheduled for release next year -- was the Xbox 360 version. Aside from the forgotten Final Fantasy XI, the console has not yet been graced by a major MMORPG and its arrival will surely be watched intently by gamers and publishers alike. Age of Conan product director, Jørgen Tharaldsen, told us that going after a console audience is a challenge, due to communication and control being handled so differently between the platforms. Will we see some cross-platform play? "We would like that to happen," answered Tharaldsen.

So would we. Having players launch sieges and fire ballistas across gaming platforms would certainly give Age of Conan: Hyborian Adventures another hook with which to, umm, hook players still wary of things massively multiplayer. Those already reeled in by the genre can look forward to the PC version's arrival on October 30th.

In this article: AgeOfConan, E307, Eidos, Funcom, HyborianAdventures, MMORPG, PC, Xbox-360
All products recommended by Engadget are selected by our editorial team, independent of our parent company. Some of our stories include affiliate links. If you buy something through one of these links, we may earn an affiliate commission.
Share
Tweet
Share