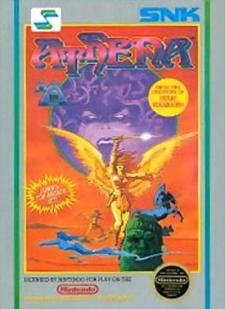 SNK's Athena should have been one of the coolest NES games available. It had a huge variety of equippable weapons, armor, and accessories, and it featured a female protagonist, a distinction shared with its contemporary, Metroid, and not much else. It didn't work out, but let's not let that minor quibble stop us from appreciating it! Any SNK game that didn't cost $300 is at least worth a look.

Why the game hasn't been announced for Virtual Console yet:
When SNK finally does get around to some Virtual Console games, they're not going to start with their NES stuff. They've got a healthy library of Neo Geo games that people actually enjoy and will buy. Not everyone listens to us. Nor should they.

Why we think it should be on the Virtual Console:
We normally have no problem making fun of games in Virtually Overlooked. Bad games are funny. But don't take our mockery for anything more than fun; we tend to enjoy weirdness and creativity in games, even when the final product doesn't work out. We have a fascination with bad games, as well. We really enjoy playing them.

But we choose not to mock Athena this week. It may not have been a successful experiment, but Athena was a bold and ambitious one, so we think it deserves some praise, for once.

Athena casts players as a female character, named, of course, Athena (not to be confused with her descendant Athena Asamiya from Psycho Soldier and the King of Fighters games). We'll consider it a progressive decision even if she is in a bikini. Athena is basically the opposite of Samus Aran, the more famous leading lady on the NES: Samus starts off as a robotic-looking suit of armor of unknown gender or species, and the revelation of a bikini-clad woman is a surprise ending. Athena starts the game as unambiguously female as a big-headed chibi NES sprite can be, and picks up full body armor along the way.

In another similarity to Metroid, Athena features multiple branching paths. While the game follows a more traditionally linear level structure, it is possible to fall down a pit, break a wall, or climb a ladder into a new area, with different creatures and items. Most of the terrain in the game is in the form of blocks breakable with a helmet or certain weapons, encouraging exploration of the levels-- even if a constant flood of enemies discourages any activity but swinging your weapon randomly.

The weapons are one of the most incredible, and frustrating, aspects of Athena. At the beginning of the game, Athena has a futile kick that barely reaches beyond her body, forcing you to get dangerously close to enemies in order to hit them. Enemies often drop the weapons they carry, and thus you quickly get a ... red club thing of some kind. You'll soon find a thing that looks like a cross between a blue mallet and a ladle, and then a blue sword, and then any number of clubs, swords, bows, balls-on-chains, and other unidentifiable things. It's the same way with armor-- you'll randomly pick up all manner of helmets, breastplates, and shields. What is better than what? No idea. It won't matter, since one of the swarm of enemies will drop something else that you won't even notice yourself walking into. Keeping your equipment is half the challenge of Athena. The other half is, you know, not being killed by horse-headed dudes.
In this article: athena, nes, snk
All products recommended by Engadget are selected by our editorial team, independent of our parent company. Some of our stories include affiliate links. If you buy something through one of these links, we may earn an affiliate commission.
Share
Tweet
Share