DoJ pushes Google and Apple to ID 10,000 users of a gun scope app 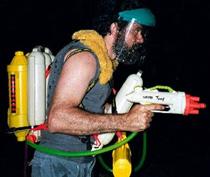 Yeah, using Avurt's IM-5 launcher and Taser International's C2 stun gun sure seem like more enjoyable ways to injure-but-not-kill the baddies, but there's a certain novelty attached to the vision of an uber-powerful Super Soaker. Apparently, a team of Russians are toying with the idea of crafting a non-lethal weapon based around "electro-hydrodynamical effects." In layman's terms, what we're looking at is a device that relies on water jets to bring down enemies whilst minimizing long-term damage, and while we're not up to speed on all the mathematics that prove this valid, it sounds pretty plausible. And hey, it's not like ammunition wouldn't be readily available in many parts of the world. [Warning: PDF read link]

[Via Wired, image courtesy of iSoaker]

In this article: gun, hydro, non-lethal, russia, russian, soaker, water, watergun, weapon
All products recommended by Engadget are selected by our editorial team, independent of our parent company. Some of our stories include affiliate links. If you buy something through one of these links, we may earn an affiliate commission.
Share
Tweet
Share