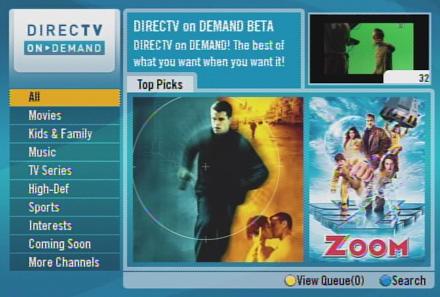 It's been a long time comin', but it looks like DirecTV's bonafide video-on-demand service is nearly ready for primetime. Judging by a descriptive thread over at DBSTalk, the service -- dubbed DirecTV on Demand -- has been rolled out in beta form to at least some users, so here's a quick look at what you can expect. First off, DoD will reportedly "be available for internet connected HR20's that are running on a compatible version of software," and requires that a user request a program via the 'net or through their HR20, after which the DVR "downloads that content via the internet, and stores the downloaded content just like any other recorded program." Feel free to hit the read link for all the nitty-gritty details, but for those into abridged versions, click on through for a few key points...

In this article: beta, directv, directv on demand, DirectvOnDemand, dtv, first look, FirstLook, hdtv, hr20, video on demand, video-on-demand, VideoOnDemand, vod
All products recommended by Engadget are selected by our editorial team, independent of our parent company. Some of our stories include affiliate links. If you buy something through one of these links, we may earn an affiliate commission.
Share
Tweet
Share