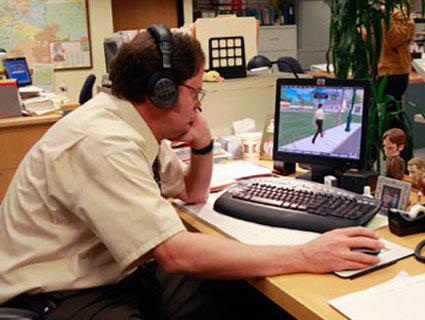 As fans of NBC's hit 'The Office' are probably well aware, last Thursday's episode "The Ad" gave a fair bit of screen time to Second Life. Games don't usually get a terribly fair treatment in popular media, as writers tend to perpetuate popular stereotypes about players as unsociable, unhealthy, or both for the sake of making an easy joke.

And while we have to concede that The Office's take on Second Life did focus on the escapism for which many people play the game, the punchlines were in all the right places. (See: Dwight's Second Life character playing an MMO within the MMO, to help escape further.) Check out the full episode on NBC's website, it's a good one.
In this article: dwight, escapism, nbc, office, pop-culture, second-life, the-office, tv
All products recommended by Engadget are selected by our editorial team, independent of our parent company. Some of our stories include affiliate links. If you buy something through one of these links, we may earn an affiliate commission.
Share
Tweet
Share