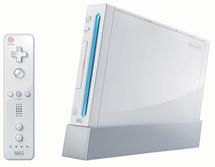 Although the Wii's Virtual Console channel has been a smashing success, there's always a price for fame: quite a few gamers are running up against the storage roadblocks of Nintendo's console and starting to wonder about expansion options beyond SD cards -- like, say, a hard drive. Sadly, however, Ninty's not having any of it, with Nintendo of America PR manager Eric Walter saying that "we really don't want people storing every single game they buy on their drive." Sounds silly, but since VC titles are yours for keeps, Nintendo's position is that you can delete games and "go back and get them any time," or, presumably, build a small library of SD cards. This odd line of reasoning also led Walter to say that he likens the situation "to putting music on your iPod; you listen to it for a while, and then you get tired of it, and you pull it off, and you put some new stuff on." Clearly Walter does not know how often we listen to the Clash on our iPods -- or how often we rock Super Mario Brothers 1 through 64. Either way, it looks like the mothership has spoken for now -- looks like it's up to the third parties to figure out a way to make it all better.

In this article: eric walter, EricWalter, nintendo, virtual console, VirtualConsole, wii
All products recommended by Engadget are selected by our editorial team, independent of our parent company. Some of our stories include affiliate links. If you buy something through one of these links, we may earn an affiliate commission.
Share
Tweet
Share