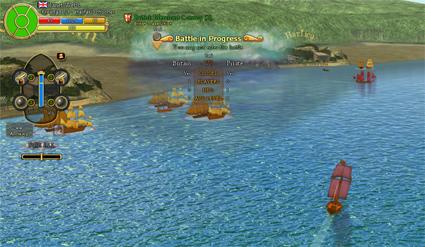 Yarr matey! Lift the gunwhales, lay out the plank, and shine yer cutlasses, there be... crafting to do? Sure, crafting and trading might not be the traditional pasttimes of choice for the pirates of lore, but we here at Massively have been sailing the seven seas (well, actually, just one of them) in the Pirates of the Burning Sea beta, and I am fascinated with the crafting system. Flying Labs has mixed some old ideas in with some new innovations, and put together a crafting and trading system that just might rival the fun of more traditional piratical activities.

For a short walkthrough on what they've put together (and a look at the economy tutorial quest), hit the link below. When you first log into the game, there's some swashbuckling and sailing to get out of the way (and we will, I believe, be covering that at some point before the game's release, too). But I flew right past these, eager to start building my own financial empire. In the starter town, there is a shop that, not surprisingly, looks like most all of the other shops everywhere, and in the shop, you'll find a "junk merchant" (who serves as the NPC vendor), an NPC to help you set up Societies (PotBS's guild system), a Ship Deed salesman (to sell Deeds that can be turned into bigger and better ships), and the Auctioneer. The first time you speak with the Auctioneer, he'll give you a quest called "The Economy: Starting Out," that will set you on your way to figuring out Pirates' complex and interesting economy.

For this character (apparently Flying Lab got rid of my old character, and I had to start a new character on the stress test servers), I chose to start as a British trader, so the quest sent me to the nearby town of Bastica, where I met up with a freetrader from the British East India Company. She (and by the way, I don't want to sound misogynistic, but there are so many female characters in Pirates it would make Robert Louis Stevenson roll around in his grave-- I don't see anything wrong with female ship captains or Admirals or marines, but it took me right out of the setting, and reminded me I was playing a politically correct game, rather than a "real" pirate setting where all the girls are wenches or testy first mates) asked me to help her start up a business, gave me some cash, and sent me into the town's shop to get in touch with Assistant Murphy (another woman-- see what I mean? yarr matey, these be strange times), who gave me some startup cash and helped my build my first building, a storage warehouse.

And here's where the crafting system gets interesting. In most games, your character is the one crafting items, but in Pirates, you actually build facilities (by obtaining Deeds), and then put crafted items in queues at those facilities. Want some wooden logs? You've got to build a Woodcutters' Camp in a specific town (and that town has to have certain resources-- more on that later), and then give that camp money and time, and eventually they'll put the logs into your warehouse. Need some gravel? You've got to build a Basic Quarry, give them money and time, and soon gravel will show up in your warehouse.

Now, when I say "money and time," I do mean doubloons-- they're the main currency in the game, and you'll need some cash for almost everything you do. But by time, I don't just mean crafting time-- each building generates what's called "stored labor" for you, and each recipe requires a certain amount of "stored labor." This stored labor actually builds up in real-time-- if you need a week of stored labor, you'll have to let it accumulate over a week of real-time. And the benefit here is that you don't have to choose what you want to build ahead of time-- you can leave the game for a few hours, come back to find a few hours of stored labor saved up, and then use that saved labor to make recipes. Likewise, you can log out of the game while your buildings craft items.

That's a huge innovation in terms of crafting systems, as it takes something all players have plenty of (logout time), and puts it to work for them as a fairly valuable resource. Ideally, even as a high level trader, you could log in for about a hour or two a week, set up all your crafting and sell your crafted items in that time. You could be an economical powerhouse even while offline.

And so that's what Murphy and I plan to do-- first we build a Warehouse (she sets me with a starting deed and some funds) so I can "store my booty"...

and then we build a Woodcutters' Camp...

And then a Quarry...

And look at this, business is already coming in! Smith wants a few wooden logs, I punch them out at the Woodcutters' Camp, and I'm on my way.

Obviously, there will be other deeds in game (for other buildings), and while each building you set up comes with a few recipes, I found that the vast majority of them have to come from elsewhere-- either PvE loot or by trading from other players. Obviously, the rarest will likely be the hardest to find.

So by now I figured I had a pretty good handle on the crafting system, and then Smith went and flipped my world again. Obviously, Bastica isn't the only port in the Caribbean-- the islands are dotted with them. And each town has its own resources, resources you need to create certain buildings and structures. All the resources for each town are listed on the map, so you can, at a glance, see where you need to go to create a certain building.

But why would you want to build in more than one town? Because PvP is a huge part of the economy in this game-- if a port you have your structures in is under contention, you won't be able to get in there to use any of your resources (you've got to be in the town your buildings are in order to hit "Create" on a recipe). So there's a lot of strategy in terms of where you choose to place which buildings, and how you're going to haul your various resources between towns. Out on the open sea, there are many dangers, and part of being a freetrader is making sure your goods get safely where they need to go. There are also tax rates for everything you create, so you may find that one day it's cheaper to build something at one port, and the next it's cheaper to build it at the other.

You also need to periodically pay upkeep on the structures you own, however, so spreading out too quick will leave some of your structures shuttered until you pay back-upkeep to get them up and running again.

And I haven't yet scratched the surface of the other side of crafting-- getting rid of the items you sell. In every town there is an auction house that you can sell your items at, and each region has its own prices in the auction house, so it's possible to trade between regions if you're sly enough (and if you can handle the heat-- I tried going out to a regional market, and had to run away from quite a few pirates, so I'm sure it'll be even tougher to go out there when the game is live and high level PvPers are on the hunt). Additionally, there are "European traders," which are NPCs that are supposedly buying your items for European consumers-- they'll give you other ingame resources for things like coffee, sugar, or tobacco, so it's completely possible to get your cannon ammo straight from them via your crafting.

With everything going on in this crafting system, I wasn't surprised to find myself really getting into it. By the end of the Economy tutorial quest, I was already level four, had three buildings down and storing up labor, and was working on a fourth (just a few doubloons away!).

Of course, the swashbucking, the cannon battles, and the rum are the reasons most people enter the piratical life, but Pirates of the Burning Sea's crafting system definitely brings a few terrific innovations into the MMO crafting game, and helps make it easier for even more casual players to start pouring out production and collecting their doubloons. When the game comes out in January, lots of players will undoubtedly be running off to make landlubbers walk the plank, but for economy buffs, a run to the Auction House will probably be just as exciting.
In this article: crafting, crafting-system, economy, featured, flying-lab, gravel, guide, how-to, joystiqfeatures, pirates, pirates-of-the-burning-sea, potbs, questing, stored-labor, woodcutters
All products recommended by Engadget are selected by our editorial team, independent of our parent company. Some of our stories include affiliate links. If you buy something through one of these links, we may earn an affiliate commission.
Share
Tweet
Share