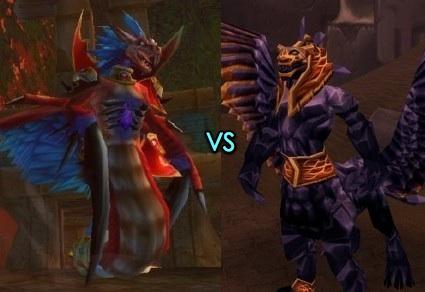 It's that time of the week again -- time to lock two World of Warcraft bosses into a life or death struggle for our amusement! We call our little game Two Bosses Enter, and each week we start with two bosses and inevitably end with one. But don't worry: our fantasy deathmatches are just for fun, the WoW Insider equivalent of arguing whether Batman could beat up Superman (as if that's even an argument -- Batman would totally win), and no actual bosses were harmed in the production of this article. But now, on to the show! This week we bring you Moam, all the way from Ahn'Qiraj in the Silithus desert, and Hakkar the Soulflayer, straight from the temple of Zul'Gurub in the Stranglethorn jungles. Who will walk away and who will be heading home? Read on to find out!

Moam is an construct created by the Twin Emperors, Vek'nilash and Vek'lor out of obsidian rock. He currently lurks in the smaller, 20-player, wing of the Ahn'Qiraj dungeon, destroying those foolish enough to cross his path. Moam is fair enough in his melee fighting ability and his obsidian body is capable of resisting both magical and phyisical attacks. However, his true strength lies in his ability to drain mana (Moam begins a fight with no mana -- and you want to avoid him reaching full mana) and summon arcane elementals. His full list of abilities is as follows:
For a player-based raid, Moam is basically on a timer -- can you burn him down before his mana reaches full?

For players, Hakkar is a gimmick fight. If you know the trick to the fight, the execution is simple, but if you don't know the trick, you'll never beat him. For his abilities, we're going to presume that he's on his own, without any support from his priests or priestesses, which leaves a simple encounter for us to think about. Hakkar brings down his opponents with the following abilities:
Hakkar also has two different mind control abilities, but these would both be rather pointless in a one on one situation.

Moam drains mana, but Hakkar drains life -- so which one would win out in the end? It's nearly time for you to to tell us, but before that, a reminder: we're considering these two bosses with approximately equal health and approximately equal damage output capabilities. We aren't making this into a math equation of who's got more health than who, so when you cast your vote, cast it on fighting style, not highest level.

%Poll-6946%
In this article: ahn'qiraj, hakkar, hakkar-the-soulflayer, moam, world-of-warcraft, wow, zul'gurub
All products recommended by Engadget are selected by our editorial team, independent of our parent company. Some of our stories include affiliate links. If you buy something through one of these links, we may earn an affiliate commission.
Share
Tweet
Share