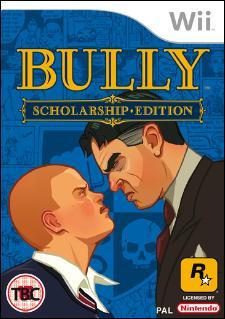 Over the years, the games industry has developed the irritating habit of cramming all of its best software into the last three months of the calendar year. The inevitable result of this is the dreaded post-Christmas lull, whereby the first quarter of the following year is severely lacking in noteworthy titles.

Despite this trend, Q1 2008 content on the Wii looks good. Like, really good. And as if No More Heroes, SEGA Superstar Tennis, The House of the Dead 2 & 3 Return, Harvest Moon Heroes, SEGA Bass Fishing, and some Nintendo fighting game you may have heard something about weren't enough to placate the Wiimote-wielding masses, now GameStop has Rockstar's Bully: Scholarship Edition listed for a U.S. release on March 3rd.

Which is awesome news, if it turns out to be true. Now all we need to do is convince Take-Two that the Wii is worthy of receiving some GTA lovin'.

In this article: action, bully, canis-canem-edit, gta, harvest-moon-heroes, No-More-Heroes, rockstar, scholarship-edition, scholarshipedition, sega-bass-fishing, sega-superstar-tennis, take-two, the-house-of-the-dead-2-and-3-return
All products recommended by Engadget are selected by our editorial team, independent of our parent company. Some of our stories include affiliate links. If you buy something through one of these links, we may earn an affiliate commission.
Share
Tweet
Share