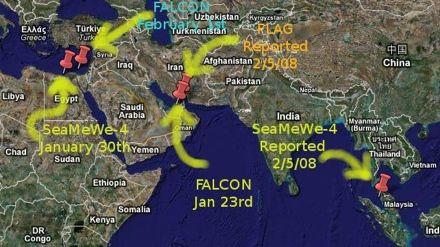 If you're reading Engadget today because your favorite Iranian gadget blog is offline, here's why: a fifth undersea cable has now been reported as cut (or at least damaged), responsible for knocking Iran and a few other million people mostly off the interwebs. Things were already looking awfully suspicious when a fourth undersea cable in the Mediterranean was cut yesterday, and while nothing about a fifth cable being cut necessarily means some sort of sabotage is to blame, it's not exactly reassuring. Emergency measures are already underway to repair the cables, but we're not sure our inter-continental Quake III Arena deathmatch can handle any more snips.

[Via Slashdot; image courtesy of I Love Bonnie]

Update: Just to be clear, early reports of the entirety of Iran being offline turned out to be exaggerated or perhaps entirely false.
In this article: internet, iran, undersea cable, UnderseaCable
All products recommended by Engadget are selected by our editorial team, independent of our parent company. Some of our stories include affiliate links. If you buy something through one of these links, we may earn an affiliate commission.
Share
Tweet
Share