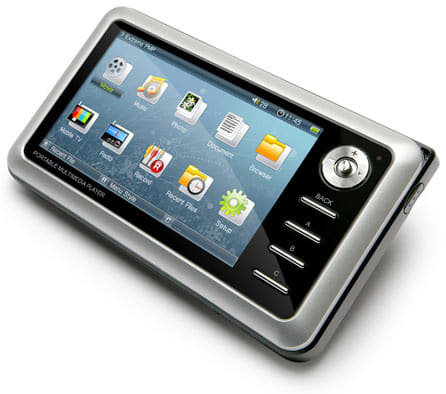 When we actually stopped to think about it, we realized that we've waited an awful long time for Cowon's A3 to finally make its way into our grubby paws, and while you've been teased before with unboxing shots and the like, we figured it prudent to snatch one of our own and decide if it really was worth the wait. On paper, this multimedia powerhouse has just about everything you could ask for given it's sub-$400 price tag, but if you've been hesitant to pull the trigger before someone else gave you the low down, head on past the break for all the deets you crave.
Cowon
A3

How would you rate the A3?
We want to hear what you think. Post a quick review now to join the conversation!
Write a review

After prying the A3 out of its subtle but sexy packaging, we were a tad turned off by the somewhat inelegant design. Sure, there's plenty of clean lines and hints of chrome, but we just can't help but feel that the D-pad and right-aligned buttons detract from the overall look. Additionally, this bugger had plenty of heft, and quite frankly, felt like a small brick when compared to a 60GB 5G iPod. Granted, this device can mop the floor in terms of utility with the aforementioned 'Pod, so we suppose a bit more weight is a fair trade for some. As for pocketability, the A3 isn't exactly first in class, but every time we thought about how uncomfortable this thing would be when shoved into a pocket, that luscious 4-inch display kept coaxing us into believing that everything was a-okay. Overall, we do feel that the A3 could stand to hit the gym, but for folks eying a PMP for video more so than audio, it's pretty much right on par with the competition.

Immediately upon firing up the device, it became crystal clear that this thing was serious about delivering high quality video on-the-go. The 800 x 480 resolution display was an absolute joy to stare at from all angles, and is by far the most impressive aspect of the A3. Colors were sharp, brightness exceeded expectations and response time was unquestionably adequate for playing back TV shows and action flicks. To be frank, there's not a whole lot to say about the screen besides the fact that it makes looking at most anything else quite difficult.

So, what good is a gorgeous display if the interface behind it is in need of serious help? Thankfully, we found the A3's user interface to be quite good. The logos were sharp and refined and the menus were elegant, though the layout was exceedingly average. Actually navigating around in there, however, proved to be annoying, oftentimes frustratingly so. We understand the lack of a touchscreen -- after all, that's what the higher-end Q5W is for, right? -- but the built-in control stick could definitely use some tweaking. On most screens, moving the Joggle Lever, as it's so eloquently dubbed, around in any direction will move to an icon, but actually pressing it downward to activate said icon didn't always work as advertised. Additionally, we can't say we were terribly fond of using this same stick to control volume; a simple rocker switch on the unit's side would be immensely more convenient for pumping the level up or down while in one's pocket. As it stands, the unit really isn't useful if your eyes aren't fixated on the front, so you should probably be prepared to whip it out frequently unless you're the type who just selects a playlist and zones out. Speaking of playlists, we were incredibly impressed with the A3's audio skills. The bundled earbuds were (unsurprisingly) horrific, but after plugging in a set of Westone UM1s, our ears were treated to crisp sound from a variety of file formats. Yep, this unit did indeed play nice with the whole gamut of supported codecs and formats, which aside from its LCD, is likely its second biggest selling point. Sadly, you won't find compatibility with DRM-infested files, but hey, we 'spose you can't always have your cake and eat it too. From APE to WAV and (almost) everything in between, this thing had no qualms interacting with a wide array of music files. With everything set to default, the sound quality rivaled that of its main competitors, but after tweaking the 10-band equalizer and having a bit of fun with the built-in BBE effects, we found ourselves actually preferring the A3. Oddly enough, the BBE enhancements actually improved our enjoyment of the tracks we chose to sample, though we admittedly expected 'em to be more gimmicky than anything else. This unit actually comes with stereo speakers atop its frame, and while they aren't nearly loud enjoy to enjoy on a blustery day, they definitely get the point across in a pinch.

Of course, chances are that you're not really looking to the A3 just for its audio abilities, and we're pleased to say that it handles video just as admirably. We tossed just about every format we could find on here simply to see what would happen, and while larger files did require a bit of a wait (a few seconds, usually) before starting up, we experienced no jitters, skips, artifacts or other slowdowns during playback, and the fast-forward / rewind functions weren't hampered with extraordinary amounts of lag. Specifically, an episode of Conan that was captured via an HTPC's OTA tuner and encoded with DivX looked stunning on the (again, marvelous) display, and our eyes never felt strained after peering at an episode for any length of time.

As expected, the screen fared just as well when viewing still images. Slideshows were crisp and didn't look overly compressed, but it should be noted that flipping through a number of untouched 5-megapixel images did cause the music to skip on almost every transition.

If you're looking seriously at the A3, chances are you're at least remotely interested in the unit's ability to double as a portable DVR, of sorts. We used the included composite adapter to record footage from a camcorder and had no issues capturing both audio and video. Unlike viewing slideshows with music spinning in the background, this process didn't seem to bog down the device and introduce skips. Recording video, as well as voice notes and FM radio, was extremely simple -- no complex setup was required, and that's just the way we like it. As for outputting video, we were able to beam the aforementioned Conan episode back to an HDTV (yeah, it does HD input / output) via the bundled component cables and check things out on the big screen. Sure, there were some minor artifacts and noticeable compression flaws, but overall, we were quite stoked about how things appeared. If you're looking for a device to tag along on your next vacation and serve up videos to the television waiting in the room, we certainly can't say the A3 would be a bad choice.

Unfortunately, we weren't able to test out the unit's ability to tune into mobile TV (being in the US and all), but we did find the integrated document viewer to be perfectly average and the battery life to be right in line with printed estimates (7 hours for video, 9 hours for audio).

Overall, we feel that Cowon has a winner on its hands with the A3. The outstanding audio quality, tightly integrated video recording / playback and tremendous codec and format support make this a unit worth craving -- if you can get over the somewhat burdensome chassis, that is. Truthfully, we'd recommend getting up close and personal with one of these before diving in head first unless you're absolutely certain that heft and bulk are not concerns, as it's really a bit harder to recommend this device to those who value compactness. Additionally, don't expect to be blown away by the unwieldy control scheme, which is really the only thing outside of size that's holding this unit back from being an absolute champion. Still, if you're willing to overlook its quirks for an interface that will hardly ever disappoint, a screen that will make all your pals envious and PVR capabilities that are atypically useful, the A3 is most definitely worth your while.
In this article: a3, cowon, features, pmp, portable audio, portable video, portableaudio, portablevideo, review
All products recommended by Engadget are selected by our editorial team, independent of our parent company. Some of our stories include affiliate links. If you buy something through one of these links, we may earn an affiliate commission.
Share
Tweet
Share