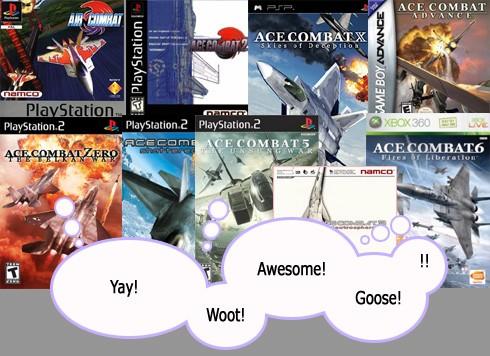 While Namco Bandai's big news yesterday came with weapons in hand, the company also let slip that its long-running arcade-style aerial combat series, Ace Combat, has surpassed more than 10 million units sold worldwide, with the franchise's fifth offspring, The Unsung War, contributing more than a million to that total in North America alone.

The series first took to the skies in 1995 with Air Combat for the original PlayStation, and has since enjoyed the company of eight additional sequels and spin-offs on multiple platforms, from the PS2 and PSP, to even 2005's Ace Combat Advance for the GBA, with the visually stunning Ace Combat 6 for the Xbox 360 reminding us all that we feel the need ... the need for speed.
In this article: ace-combat, ace-combat-6, Ace-Combat-6-Fires-of-Liberation, acecombat, acecombat6, Microsoft, namco, namco-bandai, namcobandai, PS2, PSP, Xbox-360
All products recommended by Engadget are selected by our editorial team, independent of our parent company. Some of our stories include affiliate links. If you buy something through one of these links, we may earn an affiliate commission.
Share
Tweet
Share