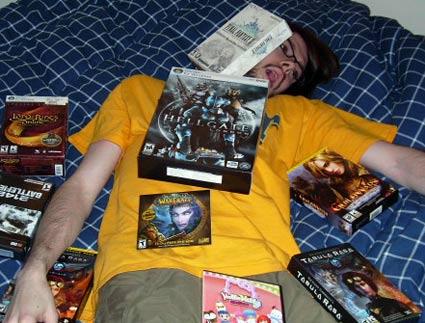 Let's be honest for a moment - there are a ton of MMOs out there. We have everything from fantasy, to dystopian future, to fantasy, to horror, to fantasy, to pirates, to fantasy, to sci-fi, and even all the way down to fantasy. While this is great for people who love choice, this is a complete nightmare (or should I say Bloodymare, ha ha, gaming puns) for anyone who's new to the genre or wants to start off with a fresh game that's different from what they're playing.

How do you separate the good from the bad? How do you know if you'll stick to a game? You don't want to gamble with an expensive game only to find out that you totally hate it and wish it would burn in the deepest depths of hell. (I'm looking at you, Risk Your Life.) So, do you rely on what your friends tell you or what reviewers tell you?

In my opinion, no one knows you except you. So when you sit down and want to pick the right game the first time, here's a few pointers and suggestions to get you started.

Before we begin, you're going to want to have a list of MMOs handy. While this sounds really complicated, it is completely the opposite. Down in the corner of Massively, we keep a record of every MMO we cover. This is a really simple and great way to track down an MMO and read more about it at the same time.

First, and probably the most important of MMO aspects in my mind, is how much time you're willing to devote to a game. Do you have a lot of time that you're willing to waste all day, or do you only have short bursts to commit to your favorite graphical universe? Amazingly enough, this decision will quickly cut your decision down almost into half.

Any free to play Korean style game is a grindfest waiting to happen. Cabal Online, Lineage II, and Ragnarok Online are just a few of the games that can consume lives. These games have high experience curves and little replay value, as you'll be sitting around killing monsters more than questing.

On the other side of the fence, you have games that make getting that level almost too easy. World of Warcraft and Lord of the Rings Online feature resting systems, so even when you're not logged in, you'll be getting double the experience next time you do. Other games, like Tabula Rasa and PlanetSide, have a built-in bonus experience system that will make leveling up easier with a group. Last, but certainly not least, Guild Wars is exclusively made for the casual gamer who wants to play a game but doesn't have all the time in the world.

Now that we have that out of the way, what genre are you interested in? This is pretty easily found out by simply looking at the name of the game or visiting the game website. Find a game that you think might suit your interests - this match is more important than you may realize.

Sure, World of Warcraft might be awesome for you for the initial levels, but if you're a die-hard sci-fi fan, then maybe the happy fantasy world might get to you after extended playing. Maybe you might be looking over the fence, feeling the grass is greener syndrome. If you need any hints on what to play, consider an MMO like a huge book. You want to pick a book you're going to read for a while. If you like sci-fi and want sci-fi, you wouldn't wander over to the fantasy section and grab The Lord of the Rings.

Fantasy: World of Warcraft, EverQuest 1 or 2, The Lord of the Rings Online, Final Fantasy XI, Vanguard: Saga of HeroesSci-Fi: EVE Online, Anarchy Online, Tabula RasaSci-Fi/Fantasy Mix: Hellgate: London, Requiem: Bloodymare, Phantasy Star UniverseComics: City of Heroes, City of VillainsPirates: The Pirates of the Caribbean Online, Pirates of the Burning SeaNinjas: Silkroad Online, World of Kung Fu, Dream of Mirror Online
Pirates vs. Ninjas: Would be a great way to capitalize on the market
Modern: The Matrix Online, The Agency

Now, we're bringing things down to a manageable size. We should be down to, at the most, 5 MMOs now. This is the time when you want to go and visit the home pages for each of those sites and see what they offer. Do they peg their game as "an amazing player vs. player experience" or "fun for the whole family"? What features do they offer in game play? Is there crafting systems to be found? These are questions that may influence your decision, or knock a game right out of the roster.

Lastly, before you run out and make your final selection, I have something to emphasize to you. Check the game's system requirements. I've worked at a GameStop/EB Games long enough to know that you can't return PC games to there, especially MMOs due to the account numbers tied to the CDs. Some of the newer MMOs have very high system requirements that can easily kill any computer that doesn't have a video card. If you want to check out what your system has on board, and are running windows, simply go to the "Run" option in the start menu (Vista users can use the quick search bar in the start menu) and type "dxdiag" without the quotes. This will run a check on your computer, and tell you exactly what you have in it. If you don't know what any of that stuff means, write it down and take it to the store with you. Most respectable gaming stores have people who understand computers and system requirements and can help you with your purchase.
Games with high system requirements: EverQuest 2, Tabula Rasa, Age of Conan, Hellgate: London, Vanguard: Saga of HeroesGames with low system requirements: World of Warcraft, Guild Wars, EVE Online, EverQuest, Ultima Online

Additionally, as a side note, you might wish to consider the strength of the community in the game. Games that have been around longer usually have a more established community, which can lead to you finding some large groups that you're able to meld in with. Games with large populations tend to have a more broken community, as with larger populations you'll get more friction and less coherence. Sometimes servers even have their own community breakdowns, which makes the whole equation even more complex. For example, World of Warcraft, due to the high player population, has an idiots per capita (NSFW) number that can rival 4chan's /b/ (NSFW).

Story might also be something that might play into your plans. Games like Final Fantasy XI, The Lord of the Rings Online, and City of Heroes/Villains stress story in their gameplay. World of Warcraft puts story in a supporting role to the gameplay. Finally, most Korean grindfests don't contain a story, even if I loaded the complete works of Shakespeare into a cannon and fired it into the game disc at point blank range.

So, you're probably thinking right now, "Yes Colin, ok, all of that is fine and refreshing like a 1930's Listerine advertisement, but what should I play?" Well, fine, because your thinking forced my hand, I guess I have to give you some default choices.

If you're new to the genre, want something easy to learn but difficult to master, and enjoy fantasy mixed with pop-culture comedy, then you'll really like playing World of Warcraft.

If you find that your frag count on Unreal Tournament is the best achievement of your whole life, but wish to engage the MMO market, then you might wish to take a look at Tabula Rasa or Hellgate: London.

If you play too much Mortal Kombat and find that every game you touch needs to have fatalities, look in the direction of Age of Conan.

If "arrr" is your favorite letter of the alphabet and you have a parrot on your shoulder, look no further than Pirates of the Burning Sea.

If you can't get the console controller out of your hand long enough to reach a computer, you want Final Fantasy XI or Phantasy Star Universe.

If you don't want to upgrade your computer, but still want something fun to play, try out EverQuest or Ultima Online.

If you don't want to upgrade your computer and you think the lint in your pocket is a commodity that can be used to barter for goods and services, then you might wish to download MapleStory or try RuneScape.

And... if you want to avoid that weird 3D graphics hullabaloo and still pay 10 bucks a month for a game to be like the other cool kids on the block, can I interest you in DragonRealms?

Now if you could excuse me, I need to go back to playing "Hellgate: The Final Lineage Rings of the World of City of Pirates Phantasy EVErealms MapleWars starring Conan Scape Online".

Colin Brennan is the weekly writer of Anti-Aliased who wants you to be happy because he wuvs you. When he's not writing here for Massively, he's over running Epic Loot For All! with his insane roommates. If you want to meet Colin and yell at him, you can do so in Second Life during his office hours of 12 PM - 2 PM EST on Tuesdays and Thursdays (SL: Seraphina Reymont), or send him an e-mail at colin.brennan AT weblogsinc DOT com.
In this article: 4chan, age-of-conan, albatross-18, anarchy-online, aoc, blizzard, ccp, city-of-heroes, city-of-villains, coh, cov, dragonrealms, ea, eb-games, eve, eve-online, everquest, everquest-2, featured, final-fantasy-xi, flagship-studios, funcom, gamestop, guild-wars, gw, hellgate, hellgate-london, hgl, joystiqfeatures, l2, lineage-2, listerine, lord-of-the-rings-online, lotro, maplestory, mortal-kombat, ncsoft, newbies, nexon, phantasy-star-universe, pirates-of-the-burning-sea, pirates-of-the-caribbean, planetside, playonline, potbs, potco, psu, runescape, simutronics, soe, sony-online-entertainment, square-enix, system-requirements, tabula-rasa, turbine, turbine-entertainment, ultima-online, unreal-tournament, vanguard, world-of-warcraft, wow
All products recommended by Engadget are selected by our editorial team, independent of our parent company. Some of our stories include affiliate links. If you buy something through one of these links, we may earn an affiliate commission.
Share
Tweet
Share