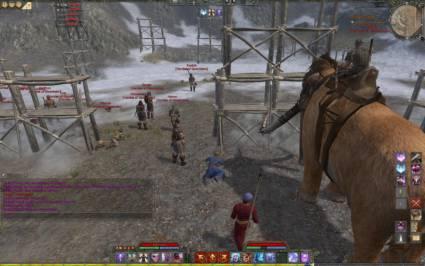 In a show of devotion to either Age of Conan or Something Awful (we are unsure which), the SA Goons and their guild, the Hordes of Goonheim, have begun construction on the first user city on a PvP server. It's also possibly the first user city in the game. In a post on NeoGAF, a Goon going by Justin relates how they got the city started and the celebration-by-trampling over their accomplishment. Hats off to those devoted Goons willing to sacrifice their time, money, and most importantly, social life to build an Age of Conan city.

One can only wonder, though, that what would happen if the Goons dedicated more time to philanthropic causes than building cities and running EVE Online alliances. The Katrina fund was just one example of the power of good that goons can do when prompted (even though it was shut down by PayPal). What if they spent more time volunteering than playing Age of Conan?

[Via JoBildo]
In this article: age-of-conan, aoc, goonheim, goons, sa, somethingawful, user-cities
All products recommended by Engadget are selected by our editorial team, independent of our parent company. Some of our stories include affiliate links. If you buy something through one of these links, we may earn an affiliate commission.
Share
Tweet
Share