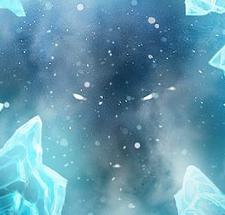 The saga of the icy splash screen continues, as the newest splash screen has just gone live on Blizzard's sites under the file name ice4.jpg. This time, the ice has cracked away even further, revealing more of the night sky, and what looks to be a face coalescing from the ice flecks and vapor in the middle of the picture. The identity of the face isn't clear, although Alex thinks it may be a Protoss Archon. We've also received this very intriguing picture from tipster Pact, which shows the face overlaid with a picture of Diablo from the Diablo 2 box. Of course, it's worth noting that it could simply be Arthas' eyes as well, peering out from his helmet.

As expected, a new rune has appeared as well, bringing the tally to four. This rune, located to the lower right of the cracking ice, looks like nothing so much as a miniature solar system model -- perhaps related to this model seen during April Fool's? Diablofans.com has suggested it may be a top-down view of an Arcane Sanctum from Warcraft 3 and WoW (You can see one at the Scryer's base in Shadowmoon) as well.

As also expected, a new piece of the strange purple monster has appeared as well. It appears to be the hindquarters of the beast. So far, I'm still sticking to my belief that it's some sort of purple penguin. This file was named 16.jpg, which, if we follow the alphabet conversion method we've been using for previous pieces, gives us the letter "P." "Powd" is the best I can get out of that. Does that mean this picture is that of a new mascot named "Powder the penguin"? As usual, you can see all of these graphics in our splash screen speculation gallery, which is constantly being updated with new speculation and analysis as the WWI draws nearer. There's more analysis to come after the break.

Of course, it's worth it to note that the master CSS file has changed again. "Cold" is the word appearing on 16.jpg's line, keep up the chilly theme to the words. It's also worth noting that 16.jpg's line has been stuck in the file between 04.jpg and 15.jpg. Is this the sign of some order needed for the numbers? If so, our order gives us the word "DPOW." I'm not quite sure what type of acronym you can make out of that, nor does it look like the beginning of any name I recognize. It may be clearer when we get the last 2 letters to complete the picture.

With the rune mentioned above, this brings our rune tally to four. Let's take a look at them, in the order they appeared.

So, if the predictions are right, we now have runes from each of Blizzard's three major active intellectual properties, and now a new rune that suggests something Starcraft 2 related. Of course, that may simply be an indication that we're going to hear lots of Starcraft 2 news at the Worldwide Invitational, which is more than likely true.

By now, the speculation has pretty much reached a rolling boil, and it's only going to get bigger from here. Not only do we have Rob Pardo's cryptic words at the Paris GDC, but we have diabloii.net claiming to have an inside source that's guaranteeing a Diablo 3 announcement and some strange goings on at the battle.net forums. While we're at it, have a look at this official Blizzard art for the WWI -- the fire in Diablo's hand there does look a lot like a 3. Coincidence? Hidden message? Hopefully we'll know for sure in a few more days. Remember, WoW Insider will have people at the Invitational bringing you all the latest news, so be sure to keep with us over the weekend to see how this all shakes down. Be sure to check out our full analysis of the earlier splash screens and other finds here and here, as well as in the gallery.

Edit: Be sure to check out the analysis and new images from the June 27th splash screen changes.