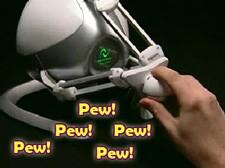 The Falcon controller just looks silly, doesn't it? Everything we've heard about it so far says it's pretty underwhelming -- the feedback doesn't work quite right, the controls seem a little less intuitive than a keyboard and mouse, and in general, it just looks strange. Fortunately, I'll be able to know for myself next week -- I've already got an appointment to check out the controller (and how it plays WoW) at E3 next week.

But in the meantime, until I can get my firsthand impressions of the Falcon up here, what are some other strange controllers that actually do work with WoW? We've heard a lot about the Zboard, which seems like a pretty good combination of a keyboard and a custom controller for Blizzard's MMO -- anyone used it? A lot of people have posted before that they use the Logitech G15, and that's really just a keyboard, except for the extra display and macros. I've used Switchblade to play with an Xbox 360 controller (and found it not nearly as easy as playing with a mouse and keyboard). And I know some players, multiboxers usually, will even use foot pedals to supplement keyboard and certain macros.

Ever played WoW with a weird controller? Is there something out there that you swear by that's not the standard mouse and keyboard? Me, I'm perfectly happy with an Apple Keyboard and my Logitech gaming mouse -- at least until I try the Falcon next week. You never know, maybe I'll fall in love with it and decide that $190 (!) is worth it.

Update: I couldn't remember the name of this one, but a lot of people in the comments (and a lot of folks before this post) have mentioned the n52 Speedpad as a good controller option.

In this article: apple-keyboard, controller, controllers, falcon, g15, ideazon, logitech, novint, xbox-360, zboard
All products recommended by Engadget are selected by our editorial team, independent of our parent company. Some of our stories include affiliate links. If you buy something through one of these links, we may earn an affiliate commission.
Share
Tweet
Share