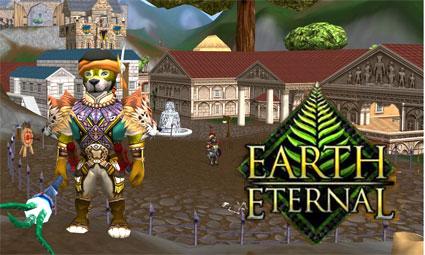 It's been awhile since we checked in on Sparkplay Media's furry animal MMO, Earth Eternal. The story goes that, eons ago, the creatures known only as "Man", once the greatest of all living things, poisoned the Earth and warred amongst themselves, making themselves extinct. The gods and other elder creatures who had more or less left Man to their own devices, decided to give that whole"mortal creature" thing another try, cleaned up the Earth, and placed the Beast people on it.

Earth Eternal will be a free to play, Runescape-like MMO where you play one of sixteen different animal races in a land of adventure and high fantasy. The game runs with a small client that downloads new areas in the background as you encounter them. As well as the usual quests, adventures and dungeon crawls, EE players will be able to make their own Groves, areas of the world of their own design, in two parts. The public part will be above ground, but there will be an equally extensive portion below ground that can be set to be as private as you like. Pictured above is a shared Grove; they can be quite elaborate.

We estimate about ... three hours after it goes live before someone makes a Grove named The Island of Misfit Toys. It's not gonna be the kind of place you bring your children, either. Check out the latest teaser video after the break.

In this article: earth-eternal, fantasy, free-to-play, iron-realms, new-title, new-titles, races, runescape
All products recommended by Engadget are selected by our editorial team, independent of our parent company. Some of our stories include affiliate links. If you buy something through one of these links, we may earn an affiliate commission.
Share
Tweet
Share