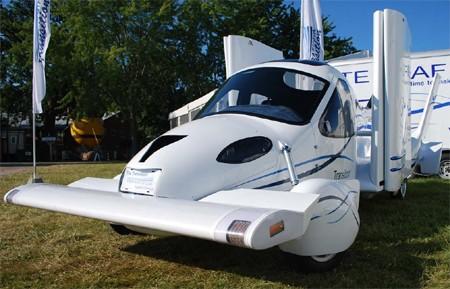 As promised, Terrafugia's Transition flying car recently made its public debut at the AirVenture air show in Oshkosh, Wisconsin, and while it didn't actually fly, it at least looks a whole lot more real than those renders the company had been showing off. Terrafugia has also gotten a bit more specific about the vehicle's specs, with it promising that the Transition's weight will stay under 850 pounds thanks to its carbon fiber body, and that it'll get about 23 mpg from its 100 hp Rotax 912 S engine. Unlike something like the fabled Moller Skycar, however, this one won't do vertical take offs and landings, so you'll either need a really long driveway or access to a runway of some sort. There's also no word on what it'll cost, but Terrafugia says it already has fifty customers awaiting delivery of the vehicle, which the company is promising will happen in 2010. If you're still craving more flying car promises, you can head on past the break for an interview with Terrafugia co-founder Samuel Schweighart courtesy of AVweb.
In this article: airventure, flying car, FlyingCar, terrafugia, terrafugia transition, TerrafugiaTransition
All products recommended by Engadget are selected by our editorial team, independent of our parent company. Some of our stories include affiliate links. If you buy something through one of these links, we may earn an affiliate commission.
Share
Tweet
Share