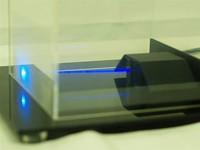 Given that Sharp will obviously be needing a few high-power laser diodes to go into its forthcoming 8x Blu-ray burners, it's good to see Mitsubishi Chemical hopping in the fabrication game in order to lower costs and keep consumers smiling. A new report asserts that the previously mentioned company will be dedicating at least some of its efforts to producing high-power (200 to 300mW) laser diodes, which are currently in short supply and used in the pick-up heads of BD writers. As it stands, just Sony, Nichia and Sharp are producing these things in volume, though a fourth wheel will certainly be welcome. There's no word on when exactly Mitsu Chemical plans to ramp up production, but the sooner the better, we say.

In this article: bd, blu ray, blu-ray, blu-ray burner, blu-ray diode, blu-ray writer, Blu-rayBurner, Blu-rayDiode, Blu-rayWriter, bluray, competition, diode, diodes, hd, industry, laser diodes, LaserDiodes, mitsubishi, mitsubishi chemical, MitsubishiChemical, recorders, supplier
All products recommended by Engadget are selected by our editorial team, independent of our parent company. Some of our stories include affiliate links. If you buy something through one of these links, we may earn an affiliate commission.
Share
Tweet
Share