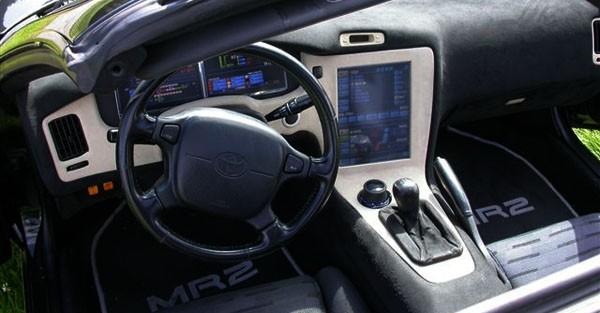 This insanely kitted out Toyota MR2 is being put up for sale by its owner somewhere in Germany -- he's a highly motivated seller, provided you have the prerequisite electronics and programming (especially Visual Basic) skills. The standard gauges and indicators in the car have been removed, replaced with touch screens and a console mounted iDrive knob, offering the pilot of this machine control over almost every aspect of its operation: climate control, GPS, fuel consumption, mirrors, radar/laser, wireless transfer of music from a home computer, lights, fog lights... and the all-important VCD playback. Also listed on the original posting is something called the "police button" which "virtually controls the police." This might have been something that Google mistranslated, but we prefer to think otherwise.

[Via Autoblog]
In this article: automobiles, carputer, cars, hack, idrive, mod, smart car, SmartCar, toyota, Toyota M2, ToyotaM2, vcd
All products recommended by Engadget are selected by our editorial team, independent of our parent company. Some of our stories include affiliate links. If you buy something through one of these links, we may earn an affiliate commission.
Share
Tweet
Share