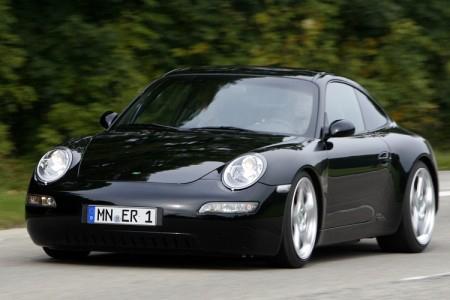 Look out Tesla / Lightning -- a new competitor just rolled out, and it's sitting pretty. Ruf Automobile has gone public with its stunning electric eRUF concept car, which is obviously based on a Porsche 911. The automobile packs a three-phase electric motor that puts out around 200-horsepower and 480 lb.-ft. of torque, and it can reportedly go from nothing to sixty in under seven ticks. The juice is provided by a Li-ion phosphate battery pack that produces 317-volts / 480-amps and is constructed from 96 individual cells, and combined with the power garnered by the regenerative braking system, it can cruise up to 180 miles before needing a ten-hour recharge. Production, pretty please?
In this article: concept, eco-friendly, electric car, ElectricCar, eRUF, eRUF Model A, ErufModelA, green, Porsche, Porsche 911, Porsche911, Ruf Automobile, RufAutomobile
All products recommended by Engadget are selected by our editorial team, independent of our parent company. Some of our stories include affiliate links. If you buy something through one of these links, we may earn an affiliate commission.
Share
Tweet
Share