Zensify, another not-so-hot social aggregator for the iPhone 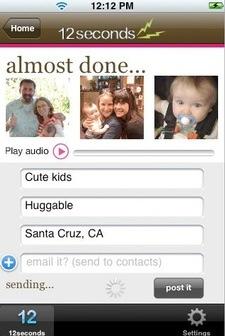 12seconds.tv is a site that started up a little while ago that seems to be aiming at a "Twitter-for-video" kind of idea -- you upload just twelve seconds of video, whether that's you saying something, video of a short scene, or whatever else you want. The site was in alpha but has recently opened up to beta (so anyone can join), and they've also released an iPhone app, available for 99 cents in the App Store right now.

"But wait, Mike," I hear you saying, "the iPhone doesn't record video!" And it still doesn't, but it does record pictures and audio, and the 12seconds app will combine a slideshow of three pictures you take with any 12 seconds of audio you record, thus creating a close approximation of a 12 second video. You can see my sample upload here, just a few pictures of my apartment's hallway and some Mountain Goats playing from my speakers. You can use pics you've already taken, and the whole process of recording, combining, and uploading works pretty well. You don't have any control over how the images slide across: it's more of a "throw it all into the mix and hope something good comes out" thing.

It's an interesting idea, and while you're paying a buck for a social networking video app that can't actually record video (not that that's 12seconds' fault, Apple), you could probably come up with some pretty creative stuff, from the artistic and witty to the requisite cat videos (because no video site is complete without a cute kitty). It's definitely not a video replacement for the iPhone, but for uploading quick and simple snippets of experience from wherever you are, it does the job.

For a different approach to photo-based videos generated on your iPhone, you can check out the free Animoto app, released last week by the website of the same name. Animoto will take 8-16 photos from your iPhone or iPod touch, let you order them and select musical accompaniment (from a provided but fairly ample list of tracks; you can't use your own music or record a soundtrack). The app then uploads your images to the Animoto site and cranks out a 30 second, montage-style video for you. You can stream the video back to your iPhone, or send it along to friends. If Techcrunch gushes about it, well, you know it must be just awesome, right?

In this article: 12seconds, app-store, apple, audio, iphone, iphone-app, pictures, recording, slideshow, uploading, video
All products recommended by Engadget are selected by our editorial team, independent of our parent company. Some of our stories include affiliate links. If you buy something through one of these links, we may earn an affiliate commission.
Share
Tweet
Share