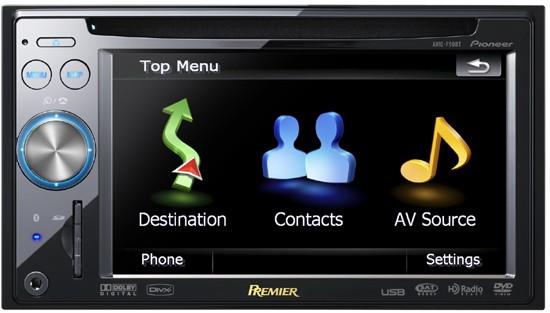 Pioneer couldn't exactly waltz into CES without a single thing for the auto lovers in attendance, so in order to keep the peace with everyone, it's introducing a gaggle of new 12V items suited for installation in your brand new car! From the top, we've got the AVH-P3100DVD and the AVH-P4100DVD head units, both of which include iPod Passenger Mode for shotgun rider control, an all new user interface, DivX support, a USB port and a 5.8- / 7-inch display, respectively. Moving on, we've got a number of new single CD players, with the loaded DEH-P7100BT and Premier DEH-P710BT making the most noise. Both of these tout Bluetooth 2.0, dual USB sockets, iTunes tagging and voice control. For the in-car audio fanatics, Pioneer's also showing off a few new amplifiers, speakers and subwoofers, though we'll just direct you past the break for details on all of that.

Pioneer's mobile business group continues to elevate the driving experience in 2009 with new products that offer cutting edge, high performance entertainment solutions and better integration with portable electronic devices, including iPod® devices and other compressed audio, video, MP3 players and Bluetooth cellular phones. Pioneer's new mobile products are designed to respond to the on-the-go lifestyles of today's consumers by expanding functionality and ease of use.

In addition to an exciting new product line up, Pioneer is also investing in efforts to increase 12-Volt consumer awareness. Pioneer propelled 12-Volt manufacturers, retailers and others at International CES in 2008 to join forces to reignite the industry, a call to action to that resulted in the 12-Volt Awareness Summit in Dallas, July 2008. The 12-Volt initiative steering committee is establishing a non-profit group that will begin implementing recommendations to improve consumer awareness. An action plan blueprint is slated to be unveiled to the industry at CES 2009.

Pioneer enhanced its audio/video offerings by increasing feature content while reducing prices. Two units, AVH-P3100DVD and the AVH-P4100DVD, sport the popular Advanced Sound Retriever (ASR) feature, which restores the harmonics lost during the audio compression process; improving overall sound quality of your compressed music. Consumers will also be able to make use of iPod features also found in Pioneer's successful line of single CD players, including:

A new user interface was also implemented in both units. Users will be able to fast forward and rewind as well as scroll through DVD/CD discs and USB connected devices containing DivX, MP3, WMA and AAC using Pioneer's slide touch operation. A bar on the left and bottom of the display pops up to let users touch and drag the scroll bar to quickly search through files and folders. The entry level AVH-P3100DVD uses a 5.8-inch touch screen while the AVH-P4100DVD boasts a larger 7-inch touch screen display.

Units also have the ability to import a JPEG picture from USB to use as a custom background.

Pioneer's 2009 single CD product offerings maintain a clean, modern look utilizing the highly regarded rotary commander for ease of use. A total of 12 new single CD players from both Pioneer and Premier lines are on the horizon for 2009 with exciting features such as OEL display, Advanced Sound Retriever, USB, compressed audio playback (MP3/WMA/AAC), auxiliary input and hi-volt outputs. Features and cosmetic enhancements were made to ensure improved ergonomics and in-dash integration to all of the units, from the entry level model DEH-11E to the flagship model DEH-P7100BT.

Beginning with the middle tier DEH-P3100UB model and up, USB inputs were implemented for quick connections to portable devices. In four units, the DEH-P5100UB, Premier DEH-P510UB, DEH-P7100BT and Premier DEH-P710BT, two sets of USB inputs were employed. This powerful feature allows users great flexibility – connect an iPod and iPhone, or two iPods (your's and a friend's), and much more simultaneously.

For those "got to have it all" individuals, the DEH-P7100BT and Premier DEH-P710BT feature key technologies such as advanced Bluetooth 2.0 from Parrot, dual USB connection, iTunes tagging and voice control. The two offerings include a twin beam microphone for exceptional sound quality and noise reduction when making Bluetooth calls. There is also Voice control available to make hands-free calls easily. The combination of all these features easily makes this the "premium" hands-free solution in the marketplace.

A World's-First feature only in these two models is a new iTunes tagging feature in which users can tag music as they listen to FM Radio (using RDS data); users can also tag using HD radio channels (optional HD Radio tuner required). Pioneer has developed a new "Tag & Share" feature using the Dual USB which allows the user to "share" their tags with another person's iPod that is connected to the unit.

Pioneer gives two of its amplifiers, the GM-6400F and GM-5400T, a polished cosmetic make over. Both amps were treated with a splash of red on the RCA and speaker terminal inputs as well as the newly designed heat sink. A sub-heat sink was placed on top of the main heat sink to ensure maximum heat dissipation. The new GM amplifiers adopted the H-shaped bottom chassis which virtually eliminates all vibrations and resonance, a design element inherited from the top-of-the-line PRS-A amplifier

Pioneer's highly successful basalt rock speaker technology introduced in 2008 is integrated into its popular line of TS-A series speakers. Each set of TS-A speakers incorporate a carbon graphite IMPP interlaced aramid/basalt fiber cone to increase rigidity for a boost in bass response. In the TS-A6993R, A6983R, A6973R and A1683R models, the cones are matched with a soft dome midrange/tweeter in a wave guide to increase output and control dispersion of upper frequencies above 10kHz. The TS-A series will be available in 6" X 9" and 6-1/2" in 3-, 4- and 5-way versions.

Pioneer is making another grand statement in the slim subwoofers arena with its new iB-Flat subwoofers. The slim subwoofers, available in the 10- and 12-inch and 2- and 4-Ohm versions, get the rock treatment as well, utilizing basalt fibers to increase rigidity to its proprietary Air Suspension cones. Pioneer's subs also feature increased sensitivity, up to an additional two decibels in the crucial bass frequencies. Sensitivity was increased using a 6-layer pure aluminum wire winding voice coil, larger cone area and larger magnet.

The AVIC-F500BT is the first hybrid system that brings the power of an in-dash device with the convenience of an on-dash system. Designed to integrate with virtually any factory audio system, the AVIC-F500BT provides the opportunity for consumers to add unparalleled navigation features and extended entertainment capabilities without modifying existing car stereos. The AVIC-F500BT allows users to control their Apple iPod players and Bluetooth enabled cell phones by voice. The AVIC-F500BT can operate as both a navigation device and entertainment media center complete with a high resolution, enhanced graphic user interface WVGA 5.8-inch touch panel display for easy map viewing and user control. The system is an aggregator and "gateway" for personal audio and communication devices. Built-in speakers and a rechargeable battery are also provided for use of the system while on the go.