HP Firebird gaming towers with VoodooDNA to start at $1,799 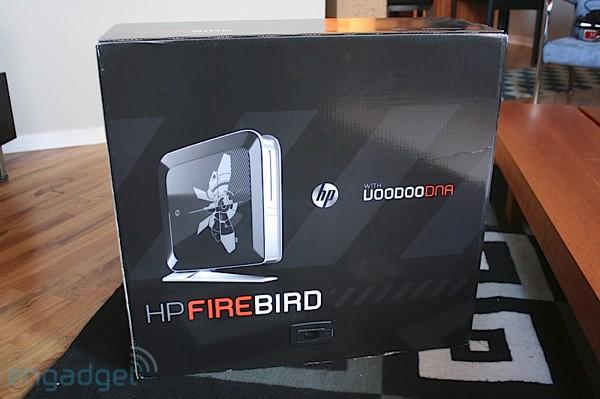 HP was nice enough to send us a prototype Firebird 802 gaming rig, and while we haven't had a chance to fire it up and start sucking at Crysis quite yet, we thought we'd throw up a quick unboxing for you. It's pretty slick stuff, all around -- the box has big plastic latches that pop open, and the machine itself is held in by swing-out cardboard panels, giving everything that "top-secret missile codes" feel you'd expect from a gaming PC. The Firebird itself looks just as nice in our living room as it did at CES, but there are some sad surprises here -- the super-heavy external power brick has a troublesomely lame connector, and the included wireless keyboard is pretty simply crap -- the slightest downward pressure basically bends it in half. Plus, we're not at all sure why the mouse and keyboard require a plug-in USB dongle -- why not just build the receiver into the gigantic chassis? We're guessing the lameness of these two is why HP also sent along a Gaming Keyboard and Laser Gaming Mouse with our tester -- we'll have those two unboxed along with our in-depth Firebird impressions a little later. For now, hit up the gallery for the full unboxing!

44
In this article: 802, featured, features, firebird, firebird 802, Firebird802, hands on, hands-on, HandsOn, hewlett packard, hewlett-packard, HewlettPackard, hp, unboxing, voodoo, voodoo dna, VoodooDna
All products recommended by Engadget are selected by our editorial team, independent of our parent company. Some of our stories include affiliate links. If you buy something through one of these links, we may earn an affiliate commission.
Share
Tweet
Share