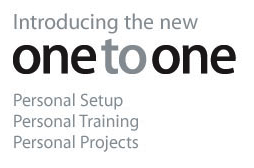 If you have purchased a Mac from Apple's online or retail stores in recent years, then you probably were offered a membership in an exclusive club known as "ProCare." ProCare's most valuable assets were advanced placement in the in-store repair queue and initial setup for new Macs, as well as free hour-long training sessions. The service, which debuted in 2004, was changed in 2007 when "One to One" was introduced, effectively splitting ProCare's training benefits into a separate service.

While ProCare is not changing, One to One is being beefed up to offer some new features as well as some new limitations. ProCare's complete Mac setup & data transfer is now included with One to One. Previously, One to One only included a "simple" setup.

Other changes for One to One include exclusive workshops only available to One to One members as well as the new "Personal Projects" session for larger blocks of time. Now members can reserve a session for up to a three hour block of time to create, with an Apple trainer's assistance, "anything ... you can dream up." Similar to workshops, Personal Projects are a group activity in that several members will be present; while a workshop includes members working on the same topic, a project session includes members working on individual and unrelated tasks.

One to One is also now only available with the purchase of a new Mac at an Apple store; this is in contrast to the previous One to One and current ProCare services which could be purchased at any time. One to One memberships are also now only renewable two times for a maximum membership duration of three years. Existing memberships (beginning prior to June 2, 2009) in One to One will be renewable only one time.

You can purchase a new One to One membership along with a new Mac at any Apple Retail store now. According to Apple this service's availability will expand to Apple's online channel in the near future. The question, One to One members, is this: are you happy about the new features of One to One, or do you wish it had not changed? If you aren't already a One to One member, will you be joining the club the next time you purchase a Mac?

In this article: apple retail, AppleRetail, one to one, OneToOne, procare
All products recommended by Engadget are selected by our editorial team, independent of our parent company. Some of our stories include affiliate links. If you buy something through one of these links, we may earn an affiliate commission.
Share
Tweet
Share