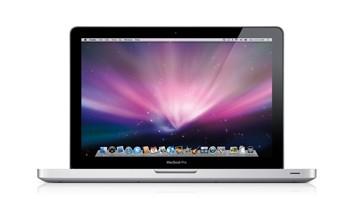 Once again, Gruber called it (aside, I wish I had his sources); the naming distinctions between the unibody 13" MacBook and the 15" MacBook Pro are now gone: say hello to the 13" MacBook Pro. Complete with a lower price (starts at $1199 and goes to $1499 in stock configurations), and more features (SD card slot, FireWire 800, 7-hour battery), the 13" MacBook Pro will likely continue to be Apple's best selling laptop.

This is an interesting reversal of branding. When the unibody MacBooks were released last fall, they appeared nearly identical to the larger, "Pro" labeled companion. The two big differences (aside from screen size) were the video card configurations (integrated for the MacBook, as opposed to integrated and discrete in the MBP) and the lack of a FireWire on the "amateur" edition. Many of us speculated that the removal of FireWire was done primarily to distinguish between the two lines and try to move consumers up to a pricier model.

There was a lively debate in the posts about FireWire's exodus from the unibody MacBook about what constitutes a "pro" machine from something that shares the same design but is smaller in size. Without rehashing the whole debate, it pretty much mirrored those "my dad is richer than your dad" fights that always seemed to break out at high school parties in my district. In my experience, when arguments essentially become "you're only a pro if the label says so," the real-world distinction is gone.


Although the lack of FireWire raised the ire of quite a few Mac fans, it clearly didn't affect sales. As Phil noted in the keynote, the 13" unibody MacBook is the best selling Apple notebook. If anything, I imagine the distinction between the two lines has only blurred further, leading to even more users going MacBook rather than MacBook Pro. Couple that with the economy and the advertising attacks aimed at price, and well, unifying the MacBook line makes a lot of sense.

It used to make sense to differentiate between a consumer-focused laptop and a laptop aimed at professionals. However, as time has elapsed, not only is raw performance between the two lines pretty much at parity (excluding 3D graphics tests), the needs of the consumer much more closely align with the needs of the professional. Continuing to brand nearly-identical products differently doesn't make a lot of sense.

Continuing to use the MacBook name on the old white plastic design still makes sense. The 13" white MacBook offers a terrific value (and great performance). Now there actually seems to be a distinction to stepping up $200 to go "Pro" -- the 7-hour integrated battery, the SD-card slot, FireWire 800 and the option of a SSD drive.

In an interesting move, the new lower-priced MacBook Pro 15" is what would have been considered a MacBook just yesterday. The $1699 US model lacks the dual video card option, and instead has the same integrated 9400M chipset as the 13" models.

So, what are your thoughts on the new unification in the Mac line-up. Does the name (or the features) change your decision about getting a 13" or 15" Mac laptop? Let us know in the comments!

In this article: features, macbook, macbook pro, macbook pro 13, MacbookPro, MacbookPro13, unibody, wwdc
All products recommended by Engadget are selected by our editorial team, independent of our parent company. Some of our stories include affiliate links. If you buy something through one of these links, we may earn an affiliate commission.
Share
Tweet
Share