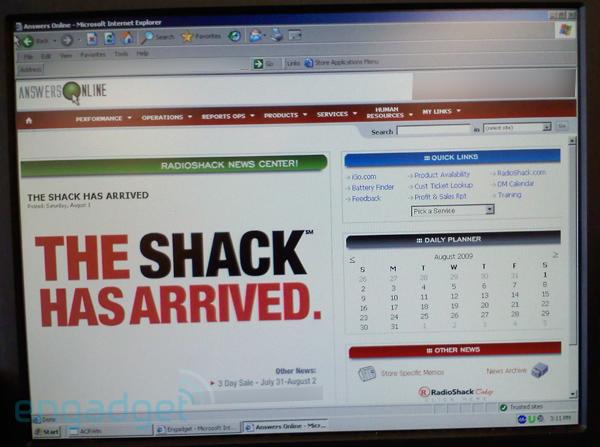 Details are a bit light on this one, but thanks to a tipster and some chatter we picked up on the interblogs, it looks like Radio Shack may be about to undergo a pretty noticeable rebranding. The above image was taken from a terminal within a store, and while it's not completely clear if this is a short-term promotional push or long-term strategy (apparently the company will remain Radio Shack on the corporate side), our tipster says that in-store signs will reflect the change this week, and storefront signage will begin to be reworked as "The Shack" sometime later this year. When you think about it, it makes perfect sense -- radios aren't exactly considered cutting edge these days, and from the sounds of things, the store is about to launch a full assault on the mobile space, bringing T-Mobile into the fold this month, and attempting to cover the gamut on cellphone reselling. Still, we're not sure "The Shack" is the right direction... unless they wanted us to immediately picture a remote location where very, very bad things happen.

Update: Apparently we're not the only ones talking about this -- someone has added detailed info on the rebranding to the company's Wikipedia page. According to the writeup, the switch will kick off with celebrations "in San Francisco and New York featuring '14 foot tall laptops' streaming the images from their webcams from one city to the other, live music in both locations, as well as television coverage of the event." Uh, okay!

Update 2: Guess they weren't kidding. Here's the promo page on Radio Shack's site. Thanks Ellis D.!
In this article: breaking news, BreakingNews, features, name change, NameChange, radio shack, RadioShack, rebranding, the shack, TheShack
All products recommended by Engadget are selected by our editorial team, independent of our parent company. Some of our stories include affiliate links. If you buy something through one of these links, we may earn an affiliate commission.
Share
Tweet
Share