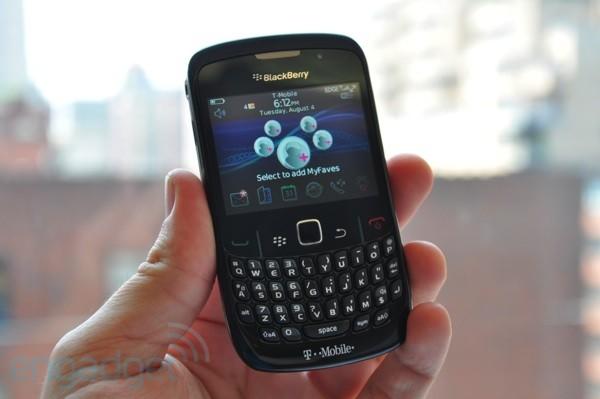 That new BlackBerry Curve 8520 for T-Mobile is in the house, sucking down EDGE data like it's going out of style (oh, right, it is). For a device that can be scored for $50 at Walmart as of tomorrow ($130 at T-Mobile stores), this is a surprisingly solid handset. The keyboard is classic BlackBerry goodness, and the overall heft gives us at least a little bit of assurance that the phone can hold up to wear and tear better than its predecessors. Most of the changes are for the better, like a trio of media keys up top and the rubberized sides, but we're not completely sold on the touchpad. It works great when it works, but if it's too clean or our thumb is at the exact wrong moisture level, we found that we kind of "stuck" to the pad instead of gliding across it. A bit of texturing could go a long way. We also found the QVGA screen to be pretty dim, which is particularly unfortunate in light of RIM's higher-end, high-res wonders, but it's certainly passable. We're planning on spending some more time with the handset, testing that EDGE network to the limit, giving UMA time to handle some of legendary conversational stylings, and seeing how many Engadget Podcast episodes we can narcissistically cram onto the bundled 1GB microSD card.

In speaking with RIM, it's quite clear that the decision to go EDGE was primarily based on price, along with the fact that T-Mobile's 3G rollout is still lacking -- it's still a head scratcher to us, though. The spokesperson also seemed pretty confident that the new touchpad interface is the way of the future, and we get the feeling the BlackBerry's legendary trackball isn't long for this world. Check out a quick video hands-on after the break, or you could opt for some fine unboxing shots below.

In this article: 8520, blackberry, blackberry curve 8520, BlackberryCurve8520, curve, curve 8520, Curve8520, engadget video, EngadgetVideo, feature, featured, features, hands-on, research in motion, ResearchInMotion, rim, t mobile, t-mobile, tmob, TMobile
All products recommended by Engadget are selected by our editorial team, independent of our parent company. Some of our stories include affiliate links. If you buy something through one of these links, we may earn an affiliate commission.
Share
Tweet
Share