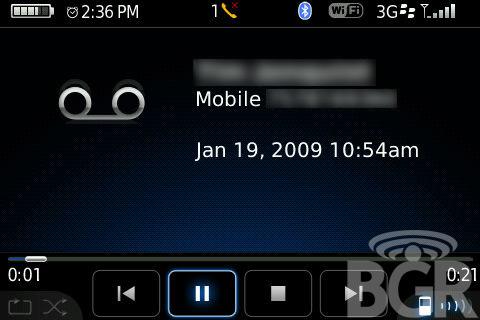 Hey, Bold users: you know how your friends with iPhones keep taunting with you with their world-class cornucopia of fart apps and built-in visual voicemail until you're about two seconds away from slapping the smile right off their faces? Of course, there's nothing that's been stopping you from using Google Voice or some other third-party service to accomplish the same thing, but for the sake of argument, let's just say you'd rather have something more integrated with a first-party feel. Well, you might just be in luck -- word on the street is that AT&T's visual voicemail service for the Bold should finally hit this Tuesday. Why wait, though? Boy Genius Report is saying that folks are having luck activating it right now by calling into customer service, so if you're dying to get this ball rolling, it might just be worth a shot. This particular service has been in the pressure cooker for a good, long while now -- and now that the Bold's getting up around middle age, we certainly hope that AT&T's efforts here are going to spread to other models, present and future.
In this article: atandt, att, blackberry, bold, mobile, research in motion, researchinmotion, rim, visual voicemail, VisualVoicemail, voicemail, vvm
All products recommended by Engadget are selected by our editorial team, independent of our parent company. Some of our stories include affiliate links. If you buy something through one of these links, we may earn an affiliate commission.
Share
Tweet
Share