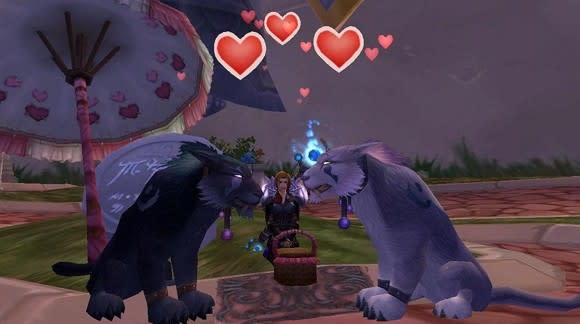 All the World's a Stage, and all the orcs and humans merely players. They have their stories and their characters; and one player in his time plays many roles.

Throughout my career as a roleplaying columnist on WoW.com, I've been talking about roleplaying as a way to tell stories, but last week a comment by Zombie, as well as those made by a few others on the same topic, caused me to think about roleplay stories in a new way. Perhaps what we roleplayers do isn't actually storytelling so much as it is character development through interesting and somewhat disjointed anecdotes.

There's really no beginning, middle, or end to a roleplayed character in WoW. Instead, what you get is a mishmash of events and experiences, which you may then string together into a story in your mind if you like. But even if you don't, you can see that most of us don't really expect for a narrative to develop from a clear beginning, through various plot developments, and finally lead into an exciting climax. There is something else roleplayers want to get out of their experience, even if many of us have trouble articulating exactly what it is.

I came into roleplaying in wow after having first roleplayed in tabletop roleplaying games like Vampire: The Masquerade and Dungeons and Dragons. These games tended to be more about whether or not you could kill the bad guy than they were about everyone creating a story together, but nonetheless the series of combat encounters were always set in some sort of narrative we could follow. Since then I have found other tabletop games I prefer a great deal over the old standbys, but one thing I really brought away from that roleplaying experience was that it was ultimately supposed to be about the story, even if its specific mechanics focused more on combat than on storytelling. WoW also had mechanics focused on combat rather than storytelling, and so at first it seemed like roleplaying on the computer or at a table would be more or less the same thing.

In the tabletop games, however, our characters were able to have a concrete effect on the world they lived in, and often the game master would lead us along while we participated in the events he set up for us. In WoW, on the other hand, we were not able to change the world significantly: named enemies we killed would reappear a few minutes later; quest givers stood forever in one spot and asked people to do the same thing over and over again; players were unable to talk to characters of the opposite faction, nor to attack other characters within their own faction; these and many other such restrictions in the game prevented us from being able to develop a clear narrative the way we used to. Some people find it difficult or impossible to construct the kind narrative they expect to see in a roleplaying experience, while those of us who keep at it have to use special tricks and techniques to get away with it, or else just get used to ignoring a lot of things.

Days of our Lives

But in the process of trying to overcome these challenges, we found out that we didn't really need to have the same kind of narrative you would expect from a fantasy story or tabletop roleplaying game. We were able to have a fun time just interacting with one another as individuals of different personalities and treating everything in the game itself as a kind of backdrop to the roleplay we were developing between our various player characters. It stopped being about whether or not we could save the world, and started revolving around how our various characters' relationships would develop, whether or not they would reveal their secrets, and so on. We found out that all the world's a stage -- literally! The places, people, and things which Blizzard put in the game are just the equivalent of painted scenery on a wooden stage, which help convey a feeling of the setting and nothing more.

But as time went by we didn't notice that our roleplay wasn't actually leading to plot that you might expect from normal performance. Timing of schedules and various activities meant that people couldn't string together long plots without inevitable holes and hiccups creeping in and clouding up any sort of objective continuity.

What our experiences lacked in plot, however, they made up for in personality. Our characters felt like real people, with feelings, desires, hopes, dreams, flaws, and silly senses of humor. Just as we don't expect our real life activities to resolve into clear narrative sequences, in the game we found we could just live moment to moment and enjoy the new things that appeared every time, even if they didn't fit together into a cohesive tale we could easily tell to our friends outside the World of Warcraft.

If you ask a roleplayer about the characters in his or her guild, he or she wouldn't usually start telling stories about them. Instead, he or she would say things about their personalities, quirks, and maybe tell some anecdotes that help illustrate these things. If someone tells you about their own character, then you may get a little bit of backstory the player made up behind the scenes, possibly before the character was even created – but what roleplayers really remember and cherish about roleplaying is the shared experiences it provides. They don't have any sort of clear beginning or end to these experiences, but they don't need them either.

Roleplaying in WoW is its own sort of medium, quite different from books and movies and even tabletop roleplaying games. The more I think about it, it seems to me that it actually bears more resemblance to Sunday morning comic strips than to any sort of narrative storytelling format. Like comic strips, things often happen which don't necessarily follow one after the next. There are episodes which are short and contained in themselves. What story elements exist there generally just serve to tell a joke, make a point or illustrate something interesting. In roleplaying, this will often revolve around some of the characters' personalities, habits or other characteristics. The narrative doesn't matter as much as the characters themselves do and if there is not much continuity between episodes then that's really okay. That narrative continuity isn't what roleplayers are actually looking for – it's the relationships and shared experience that count, and in the roleplayer's mind, the memory of those experiences never ends.

All the World's a Stage is your source for roleplaying ideas, innovations, and ironies -- we have a lot of ways to help you get started with new characters. Whether you want to start a new goblin or worgen, or play any one of the new race and class combinations, (or even any of the old ones) as you level up in the new world after the Cataclysm, there are lots of ways to get started roleplaying a new character.
In this article: all-the-worlds-a-stage, character, comic-strips, continuity, days-of-our-lives, dungeons-and-dragons, great-expectations, guide-to-lore, lore, lore-guide, personality, role-play, role-playing, role-playing-guide, roleplay, roleplayer, roleplaying, roleplaying-games, rp, rp-guide, rpg, story, sunday-morning-funnies, tabletop, tabletop-gaming, the-neverending-story, vampire, world-of-warcraft-lore, wow-lore, wow-role-playing, wow-role-playing-guide, wow-rp, wow-rp-guide, wow-rping
All products recommended by Engadget are selected by our editorial team, independent of our parent company. Some of our stories include affiliate links. If you buy something through one of these links, we may earn an affiliate commission.
Share
Tweet
Share