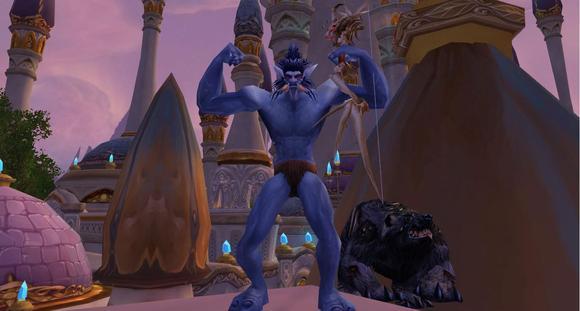 Want to crush your enemies, see them driven before you, and hear the lamentation of their women? Blood Sport investigates the entirety of all-things arena for gladiators and challengers alike. C. Christian Moore, multiple rank 1 gladiator, examines the latest arena strategy, trends, compositions and more in WoW.com's arena column.

David Byrne and The Talking Heads are a personal favorite. Miles Fisher seems to love them as well. His cover of This Must Be The Place (Naive Melody) is homage to one of the most beautiful, striking melodies I've ever heard, and as such, it will be your listening music for the day. (NSFW Warning: The video is a parody/reenactment of American Psycho, so view carefully.)

Last time, we went over the Will of the Forsaken nerf, 100% pet resilience, death knights, and druids. The patch looks to be a very interesting bag of surprises for arena enthusiasts, we're getting major changes to the way some races work, as well as nearly every class is getting a pretty substantial change or two which will probably help them in PvP. We don't normally see patches where most classes are buffed, but this could be one of them.

Read on to find out what's up with hunters, mages, and paladins in Patch 3.3!

I normally wouldn't talk about Call Stabled Pet's reduction in cooldown, but I need to add this in because it is now one of very few abilities with 15 minute-or-less cooldowns which cannot be used in arena. This is a pretty vast change from The Burning Crusade era, where the only thing preventing an ability from being used in arena was the cooldown.Sweet, more survivability for hunters in deterrence! For an ability that renders the hunter largely inactive for the benefit of protection (and only from the front), it's nice to see it being applied more liberally.

Beast Mastery
Mostly a buff. intimidation can now be used to stop casts reliably. Unfortunately, the global cooldown from using Intimidation will be still in full swing throughout most of the stun. This causes less burst damage while the target is stunned and vulnerable for the pickins'. This can be seen as a slight nerf to potential burst that beast mastery hunters have available.

Pets
Why can't hunter pets just work like warlock pets? Dinging 80 instead of 75 the moment you tame them would be a lot nicer for trying out new pets, or getting a different skin of the same type of pet you have now. I'm adding this because I think new arena players would benefit from such a change so they can determine what kind of pet is best for them. Blizzard, if you're reading, thanks for the boost in experience, but it's not fun leveling pets!
Because this change affects all pets (death knight, mage, druid, hunter, warlock, priest, shaman, etc) I'm going to leave the patch notes intact for each class, but not elaborate on the change more than once.

This is a fantastic change. AoE should punish the foolish hunter or warlock that sends his pet to attack a bladestorming warrior. Mirror images / treants should be able to die via Arcane Explosion, if a mage opponent desires. AoE should be a potent tool for their class in PvP. Also, keep in mind pets that cannot be controlled (i.e. images and treants) are getting a boost in HP to prevent them from dying too quickly from AoE (in addition to the 100% resilience boost).The cower bug is infuriating. If you don't know what I'm talking about, you probably haven't played a hunter. In case you haven't had the pleasure of hearing a hunter moan and groan about it -- pets will often make themselves autocast cower. This is frustrating, particularly while leveling and farming because tenacity pets should try to hold the maximum amount of threat they can. Cool survivability buff, but pretty lame that the pet's movement speed will be decreased by 50%.
Oh, I guess they thought of that. Well, good show then.
Hunter pets finally get avoidance without having to spend talent points on it, woo-hoo. Yeah, I just said woo-hoo. You can substitute any of your favorite happy exclamations there, such as hip-hip-hooray, whee, or ekke-ekke-ekke-ekke-ptang-zoo-boing-zow-zing. It will be interesting to see what hunters do with pet talents in Patch 3.3.
Root abilities are pretty strong in PvP, especially for ranged dps classes. I see a lot of hunters running around with silithids, spiders, and crabs to benefit from their key abilities. Crabs aren't given a buff here as Pin is a channeled ability which needs melee range to work. Increasing the range to 30 yards will allow hunters to catch that fleeing opponent a little easier, or halt an opponent before they get the opener.

FrostThis does not mean frost mages will be nuking death knights when they pop Icebound Fortitude. This is a PvE change that I feel compelled to talk about, in order to clear up some confusion about the change. This is to make frost mages raid viable, not to give them a new super powerful burst spell.Whoa. Step back a second. So you mean every time my Ice Lance crits, my next Frostbolt's cast time drops one second? I should probably sue Blizzard. Not for this huge buff, but for damages suffered to my jaw from bouncing against my floor. I understand this is probably a raid buff, but this is going to make arena really, really fun for frost mages. A lot of gladiators aren't so happy about this change, but it's probably nothing to get ridiculously upset about. It will just make mage burst a little more unpredictable.

PetsBecause this change applies to seven out of ten classes, I'm only going to talk about it once. Scroll up to hunters if you want to read about this change.I talked about this a good bit in our last installment. The health increase is necessary because of avoidance being nerfed.Pets shouldn't run out of mana. Ever. This change is, of course, due to the new mage glyph which allows a water elemental to always be in play. This is primarily a PvE change, but it will be nice for PvP, particularly if mages want to experiment with using that new glyph (although I doubt many will).

Holy
This change is a great step away from the random number generator that we've come to know and hate (Holy Shock crits). Instead, it allows paladins to keep a heal-over-time up on the target (similar to a restoration druid's Regrowth). A PvP change I'm sure many holy paladins will welcome.

Protection
This is probably a nerf to wizard cleave (two spell dps casters + a holy paladin) in 3v3 and 2345 and 2346 lineups in 5v5. (2345 stands for holy paladin, discipline priest, warrior or hunter, elemental shaman, and mage, 2346 is a warlock instead of a mage in the same lineup).
Aura Mastery made heavy spell dps compositions extremely powerful by allowing burst rotations to go off uninterrupted. Teams would regularly be able to force a Pain Suppression or Hand of Protection, then pop Aura Mastery and go off the deep end whenever the protective buff faded.
This change is likely a huge buff in regard to team survivability for holy in PvP. Because hey, that's what holy paladins are supposed to do: help your team survive. Some paladins might be peeved about the six second duration, but it's usually not that big of a deal, six seconds is plenty for most WotLK bursting strategies.
I've had paladins die in 5v5 because they popped Divine Sacrifice and our team was taking too much damage. I'm glad the last line is there. If I have this right, 40% times 5 = 200%, so this is a buff from 150-160%, which is pretty nice.

That'll have to do it for now, gang. Tune in next time when we'll talk about the rest of the classes and everyone's new glyphs!