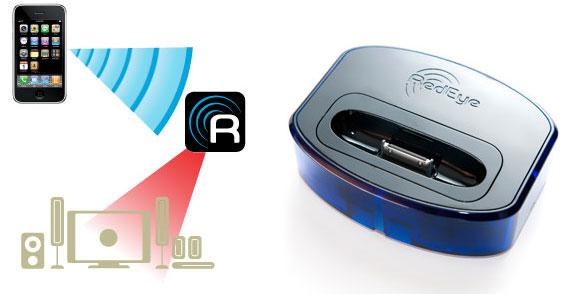 Apple's 'Remote' application was a good start, but we've known for some time now that the platform was capable of far, far more. ThinkFlood is stepping up today and proving our assumptions right, as the RedEye universal remote control system effectively converts your iPhone or iPod touch into a remote for any IR-equipped component. The app itself is completely free to download, though it's the $188 base station that really makes the magic happen; your handheld talks to said dock via WiFi, and if you've got an AV device, home automation system or pretty much anything that responds to IR signals, your iPhone can now control it. The setup supports multiple rooms, controllers and users simultaneously, and we're told that it "controls a virtually unlimited number of devices and can store a virtually unlimited number of commands." Heck, this thing even reacts to multitouch gestures and accelerometer controls. Don't believe us? Check the vids just past the break.


See more videos at our hub!
In this article: accessories, accessory, app, app store, apple, AppStore, infrared, iphone, iphone remote, IphoneRemote, ipod touch, IpodTouch, IR, redeye, remote, remote control, RemoteControl, thinkflood, universal remote, UniversalRemote, video, wifi
All products recommended by Engadget are selected by our editorial team, independent of our parent company. Some of our stories include affiliate links. If you buy something through one of these links, we may earn an affiliate commission.
Share
Tweet
Share