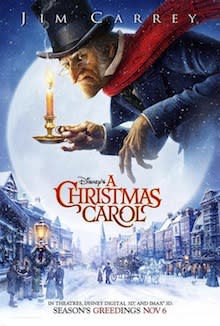 Yes you read that right, the studio with the most new 3D movies around isn't going to release its first title until the fourth quarter of 2010. We've seen some cool 3D demos in past few days but lets face it, the technology is worthless without content. Now you might think that Disney would help launch 3D with a big hit like Toy Story 3, but you'd be wrong. No instead it'll all get kicked off with Disney's A Christmas Carol -- no we're not feeling it either. Disney is the third studio to announce 3D content that'll be released this year, and although none of them are up our alley, we're sure someone is excited to see them.


BURBANK, Calif. - January 7, 2010 - Continuing its leadership in the advancement of 3D entertainment, The Walt Disney Studios today announced plans to start releasing Disney Digital 3D content for the home on Blu-ray Disc beginning in 2010 with Disney's A Christmas Carol and a special 3D Showcase Disc. Disney's new Digital 3D content for the home on Blu-ray™ will be made available in coordination with hardware manufacturers' upcoming release of new 3D home entertainment systems so that consumers can experience the magic of Disney 3D in their home upon installation

"The Walt Disney Studios has produced and released more 3D content than any other major studio to date and remains at the forefront in the continued innovation and development of today's most advanced digital 3D and Blu-ray technology," commented Bob Chapek, President of Distribution for The Walt Disney Studios. "We are excited to offer consumers an incredible line-up of true three-dimensional films and footage that will revolutionize the in-home entertainment experience."

The 3D-enabled Blu-ray release of Disney's A Christmas Carol, available broadly in fourth quarter of 2010, will represent the studios' debut title that will launch a new premium line-up of Disney Digital 3D movies for the home. Disney's A Christmas Carol, starring Jim Carrey, will be a groundbreaking multi-sensory, three-dimensional hi-def home entertainment experience that captures the fantastical essence of the classic Dickens tale. Re-envisioned by Academy Award®-winning filmmaker Robert Zemeckis (Best Director, Forrest Gump, 1994), Disney's A Christmas Carol will be sure to mesmerize audiences of all ages in its new technologically-advanced digital 3D home video presentation.

In addition to the anticipated release of Disney's A Christmas Carol, and in an effort to provide early adopters with premium content that optimally showcases their new 3D home theater systems with Disney 3D content, Disney has also created an exclusive 3D Showcase Disc available for mass distribution. This new 3D Showcase Disc is a compilation of upcoming 3D product, footage and promotional trailers that contains a variety of vividly mesmerizing clips from Disney's 3D content library including but not limited to, Walt Disney's 1953 animated short "Working for Peanuts," promotional trailers of upcoming 3D-enabled Blu-ray releases like Disney's A Christmas Carol, Alice in Wonderland and Disney●Pixar's Toy Story 3 plus original content created exclusively for this disc. The new 3D Showcase Disc is now available for manufacturers to start placing orders so they may bundle with their 3D hardware. To learn more about how your company can take advantage of this showcase disc, please contact Christina Yao via phone at 818-295-4474 or email at Christina.Yao@Disney.com.
In this article: 3D, Blu-ray, CES, CES 2010, Ces2010, Disney, Disneys A Christmas Carol, DisneysAChristmasCarol
All products recommended by Engadget are selected by our editorial team, independent of our parent company. Some of our stories include affiliate links. If you buy something through one of these links, we may earn an affiliate commission.
Share
Tweet
Share