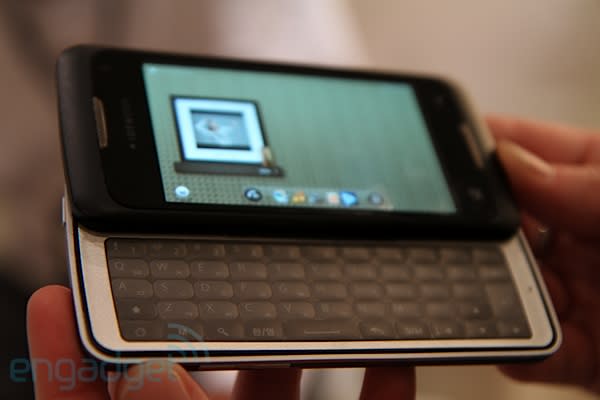 We don't know what everybody else in the phone business has been doing lately, but Inbrics has just unveiled what looks to be the near-ultimate Android phone. The Inbrics M1 is a slider handset with a (great) 3.7-inch WVGA AMOLED display, 3 megapixel camera, front-facing VGA camera, 16GB of built-in storage, microSD slot and all the other usual trimmings, but what's particularly stunning is that the phone is not only half an inch thick, but it has a full QWERTY keyboard that's surprisingly clicky and typable. The phone is running Android 1.5 right now, but it should be up to Android 2.0 by the time it hits the market in March. The biggest concern is the 800MHz Samsung processor, the same chip that's in the Samsung Moment, but the interface (as demonstrated in the video after the break) is smooth as butter, and they demo'd it playing back 720p video just fine.

Inbrics actually has a lot of custom UI and software running on top of Android, but the most interesting part is what they're doing with video calling and beaming media from handset to videophone to TV to laptop over DLNA or through an access point device that plugs into the TV over HDMI. Inbrics also has a Cover Flow-style media browser that isn't super deep in functionality, but still puts the stock Android stuff to shame, and some rather sexy custom widgets.

The plan is apparently to get a carrier to bite and rebrand this phone in the US, so price and availability are still pretty hard to pin down, but if this phone can hit the market soon it sure could give the rest of the QWERTY Android sliders out there some body image issues. In this article: android, ces, ces 2010, Ces2010, hands-on, inbrics, qwerty slider, QwertySlider, slider
All products recommended by Engadget are selected by our editorial team, independent of our parent company. Some of our stories include affiliate links. If you buy something through one of these links, we may earn an affiliate commission.
Share
Tweet
Share