J. Stern
February 5th, 2010
In this article: 1008p, asus, asus eee pc, asus eee pc 1008p, Asus Eee PC Seashell, AsusEeePc, AsusEeePc1008p, AsusEeePcSeashell, eee, eee pc, eee pc 1008p, Eee PC 1008P Seashell, EeePc, EeePc1008p, EeePc1008pSeashell, impressions, karim rashid, KarimRashid, laptop, laptops, netbook, netbooks, review
What do you do if your netbooks are starting to look so last season? Well if you're ASUS, you hire a leading industrial designer like Karim Rashid to revamp it, of course. The Eee PC 1008P's snazzy new design and removable battery certainly caught our eye at CES, but now so is its $499 pricetag. Positioned as a designer netbook, the 1008P is a mixed bag of specs -- it has got the now-typical Intel Atom N450 processor, boasts 2GB of RAM and larger 320GB hard drive, as well as a disappointingly small three-cell battery. So, are the 1008P's slimmer body and eye-catching design enough to make you shell out $100 more than the typical netbook? And how does the the smaller capacity battery compare to the $380 Eee PC 1005PE's that lasts for eight hours on a charge? Follow on past the break for some answers.
%Gallery-84682%
ASUS 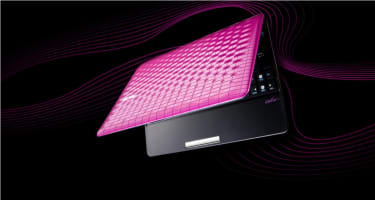 Involving a top designer in the look of the 1008P was nothing but a good move in our opinion. The texture of the crocodile skin-like lid, or what ASUS calls Digi-Wave, feels great in hand and gives it a much higher-class look than the now-standard gloss finish. But then there's the question of color. In what we interpret to be his and hers options, the netbook comes in both a glossy hot pink and a matte coffee brown. Maybe we just hate pink laptops, but we can't see anyone but Barbie going for the brighter finish (or Ken if he's shopping for her Valentine's Day present). The brown color is all sorts of classy, however.

The Eee PC 1008P is thinner than most netbooks, and its 1-inch thick chassis is the same as the 1008HA, meaning that all the ports are hidden behind teeny doors. In a space saving move, there's a mini VGA port on the left hand side, and the VGA adapter pops out of the bottom of the netbook. Pretty cool trick, but fitting that adapter back into its place was extremely frustrating. The rest of the standard netbook ports are laid out along the edges, though the 1008P only has two USB ports rather than the typical three.

Under the lid is the same keyboard and touchpad set up as the 1005PE. We're still fans of the rubbery feeling dotted touchpad and chiclet style keyboard -- we'd still like to see the right Shift key made full size, but we like its improved placement to the left of the up arrow. Despite the nice looking frameless 10.1-inch screen the viewing angles are still poor; pushing the screen back causes images to be washed out and viewing the screen from the side wasn't much better.

As mentioned before, the internal specs are pretty much the same as all the Pine Trail netbooks out there, with an extra gig of RAM. Surfing in Firefox and writing some posts in Microsoft Word 2007 was snappy, though obviously no faster than the Eee PC 1005PE. ASUS does throw in 320GB of storage and it's Expressgate instant-on software, which launched in 7 seconds after hitting the button above the keyboard.


The biggest change in performance really comes in battery life -- because of its thin stature the 10058P could only make room for a three-cell, 31Wh battery. On our video run down test with brightness set to 65 percent, it lasted three hours and 20 minutes. That's about five hours less than the 1005PE's runtime! Though the battery is removable and you'll be able to pick up an extra for about $50, you can't ignore the fact that it's pretty annoying to keep swapping out batteries on-the-go. Apparently the netbook will be sold with two batteries in other countries, but in the U.S. it will only come with one.

Unfortunately, we think we have to add the 1008P to the list of laptops that suffer from performance issues at the expense of better design, like the HP Envy and Dell Adamo. While we love the textured chassis (in brown!) and think it's one good looking netbook, we can't justify paying more for less battery life. If we're going to pay $499 for a netbook, we'd take the Ion-equipped Eee PC 1201N that has comparable battery life to the 1008P, but much better gaming and HD performance. That's not to say the 1008P isn't perfect for those that are all about netbook beauty, but we're just doubtful that's the case for many people, and thus we don't see why you wouldn't go with a cheaper option like the 1005PE with its eight hours of battery life.
All products recommended by Engadget are selected by our editorial team, independent of our parent company. Some of our stories include affiliate links. If you buy something through one of these links, we may earn an affiliate commission.