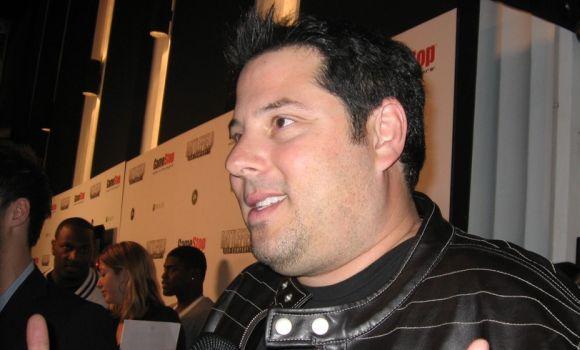 Lots of the celebrities at last night's Battlefield: Bad Company 2 celebrity benefit tournament didn't know much about gaming, but Greg Grunberg is the exception. Even if he can't dive deep into the differences between next-gen shooters, he at least knows the audience, having appeared on Lost and Alias and controlled minds as Matt Parkman on Heroes. He was at the benefit in West Hollywood promoting the Epilepsy Foundation (his son deals with epileptic seizures, and Grunberg has done some advocacy work on his own as well), and right before he sat down to play BFBC2 alongside Chad Ochocinco and Marshall Faulk, he sat down to chat with us.

Read on to hear about what Grunny is doing for Halo: Reach, his favorite iPhone games and why he's so sure there should be one more full season of Heroes.


What's your experience with gaming?

I love games. I've voiced a few, I voiced Condemned, I voiced Timeshift, I'm doing Halo next week. This [Battlefield: Bad Company 2] is a very cool game -- I don't know if you ever played the first version of this, but it's awesome. And this one kind of blows away the first version. Not completely different, but there's so many new things to it. That I don't even know, but -- [points to senior producer Patrick Bach] he produced the game, and he told me that you can use the defibrillator to kill people, not just bring them back to life. So I'm very excited about that.

Bad Company, the first one was the one you played?

So what do you think about it compared to Modern Warfare?

I don't spend enough time playing these games, to be honest with you. I've got three boys, and these are not appropriate games to be playing with them.

Do you play games with the kids then?

I do, but we play the sports games. We play NBA 2K9, is what we're playing, we're a little behind. And Madden 10, they love them.

So Halo: Reach, is that the one you're doing next week?

Yeah. They won't tell me anything. I went and I met with them, they're great guys, and I went in and I basically said, I will do anything you want me to do. I'm a fan of Halo. There was a thing on cable -- it was on G4, I think -- and I did a whole thing about Halo, just a little thing. But yeah, I'm very excited to see what they have in store for me.

You've got this Yowza app on iPhone [Grunberg is a co-founder]. Do you play iPhone games at all?

I do. I play a lot of the kind of silly, ridiculous games. You know, there's a game that people can play, it's so much fun, it's called IQ Boost. It's stupid and silly, but it really works on your brain, it helps you with memorization and everything. I play that with my kids. I play -- I'll tell you what I have. I play a lot of the old games...

[Pulls out his iPhone, unlocks it to look through the icons]

Of course Yowza comes up right away. I've got Cube Runner, Centipede. Have you seen Type n Walk? That's not a game, but it's really cool. Jewish Days, I need to know when the Jewish holidays are. Flight Control is cool. Peg Jump, as stupid and silly as that is, I love that. What else do I have on here? Oh this is good, Fieldrunners, have you done Fieldrunners?

That is so much fun. Squish is another simple game. I love Infinity Gene -- that's like the old Space Invaders. I've got Galaga Remix, Wheel of Fortune.

You're covered -- how many screens you got going on there?

I know, I've got too many. I just downloaded FallDown!. Have you played FallDown!? Check this out. [demoes the game]

I'm not because, first of all, the show makes so much money. It's the number one DVR'ed show, they make so much money on DVD, all over the world it's popular. So I just hope they don't move it to SyFy to finish it off or something like that. I think if they give us another 13 or 22 [episodes] and we can properly wrap up the stories, I'll be very happy. I like the way this season ended, I liked it. But there wasn't an ending to the series by any means.

For sure. They need to finish it off.

Great. Thanks very much!

Thank you.
In this article: app, battlefield, battlefield-bad-company, battlefield-bad-company-2, celebrity, dice, ea, ea-dice, Electronic-Arts, greg-grunberg, halo-reach, heroes, interview, iphone, lost, madden-10, Microsoft, nba-2k9, television, Xbox-360, yowza
All products recommended by Engadget are selected by our editorial team, independent of our parent company. Some of our stories include affiliate links. If you buy something through one of these links, we may earn an affiliate commission.
Share
Tweet
Share