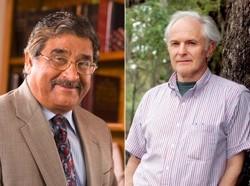 The discovery is still literally in the building blocks stage, but a team of researchers from Florida State University say that four new so-called "multiferroic" crystals they've identified could eventually lead to a "new generation" of computer chips. Those new chips would apparently not only be able to expand the capacity of storage devices by 1,000 to a million times but, since data would be written both electrically and magnetically, they'd also be far more secure. As if that wasn't enough, the researchers also say any future chips would have "far less environmental impact" than current chips, as they wouldn't rely on lead as chips now do. Of course, the researchers are quick to point out that won't happen overnight, with Sir Harold Kroto saying that this discovery is "where the transistor was when it was first invented," and adding that "it's a long, hard road before we catch up."