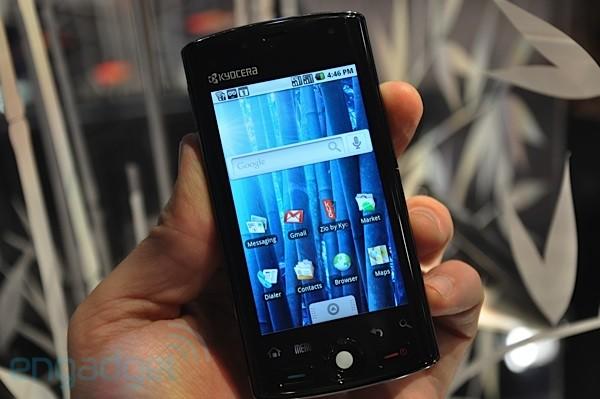 It's totally unfair to Kyocera that we played with its new Zio M6000 mid-tier Android smartphone mere hours after our first look at the HTC EVO 4G, but while we were excited to see a cheaper phone with an 800 x 480 screen, the end result is pretty disappointing. The device crams that resolution into a 3.5-inch screen, which wouldn't be so bad if the capacitive touchscreen element wasn't so low-end. It seemed both unresponsive and lacking in accuracy -- at times we had trouble even dragging open the notification tray. We were told that we were looking at a prototype of the device, but the crumminess seemed pretty uniform across multiple Zios we tested. The device also seemed just generally sluggish -- we'd think the 600MHz Qualcomm processor could handle Android 1.6 just fine, but perhaps there's some optimization left to do. Kyocera told us that the phone is easily upgraded to 2.0 or 2.1, based on carrier wishes, and that they don't have any plans for skinning it. Ironically, running 1.6 on this high res display actually ends up looking worse than a regular low-res screen, due to the blurry icons and UI elements. The cheap looking capacitive touch buttons aren't much out of the norm for Android, but interesting the phone doesn't have any haptics to let you know if you've clicked one. Meanwhile, the haptic feedback for touchscreen typing is cranked to 11 and significantly unhelpful.

In one final negative note, the phone takes one of the worst pages out of the Palm book and put plastic doors over not only the USB plug but the microSD slot and side-mounted headphone jack as well. On the plus side: this is an incredibly thin and light phone, and we doubt the price (less than $200 or so unsubsidized) probably will be beat in the US for a while. Expect to see it on a low-end CDMA carrier (like Virgin Mobile or Cricket) near the middle of the year. Check out a video after the break! In this article: android, android 1.6, Android1.6, hands-on, kyocera, kyocera zio m6000, KyoceraZioM6000, zio
All products recommended by Engadget are selected by our editorial team, independent of our parent company. Some of our stories include affiliate links. If you buy something through one of these links, we may earn an affiliate commission.
Share
Tweet
Share