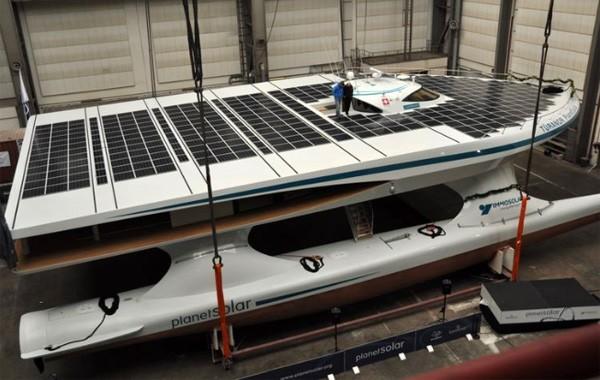 You'll be forgiven for letting the PlanetSolar boat slip your mind in the year that's passed since we last heard of it, but the engineers behind the project haven't been slacking and today we're hearing that the multihull vessel has been put into the water to begin its seafaring tests. With nearly 5,400 square feet of photovoltaic cells adorning its roof, this is by far the biggest and most ambitious solar-powered boat yet, so it's no surprise that it won't be casting off on its globe circumnavigation attempt until at least April 2011. For now, you can enjoy photos of the vast ray-muncher at the PlanetSolar link below or skip past the break for the latest video from the team.

[Thanks, Pavel]
In this article: boat, circumnavigation, eco-friendly, environmentally friendly, EnvironmentallyFriendly, germany, knierim yachtbau, KnierimYachtbau, photovoltaic, planetsolar, raphael domjan, RaphaelDomjan, renewable energy, RenewableEnergy, solar, solar energy, solar power, solar powered, solar-powered, SolarEnergy, SolarPower, SolarPowered, video, yacht
All products recommended by Engadget are selected by our editorial team, independent of our parent company. Some of our stories include affiliate links. If you buy something through one of these links, we may earn an affiliate commission.
Share
Tweet
Share