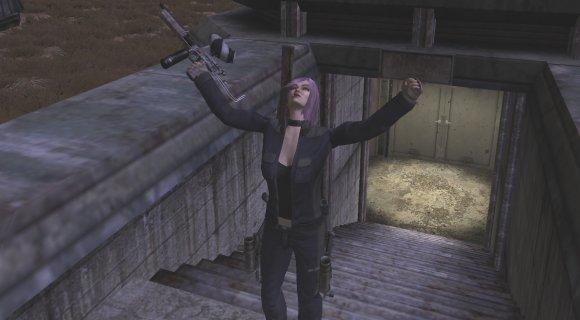 I remember it like it was yesterday. I was a new clone emerging from the LifeNet Pod in Zanesville; it was early access launch day: 9/9/09. I have never, and likely will never again, see Zanesville so crowded. Fallen Earth had been live for only a few hours, so I opened the social window to see how far behind the power curve I was. Someone was already level 8. Egad! Better get moving.

My first goal was to get rid of my LifeNet garb, so I didn't look like such a noob -- not that I didn't fit right in. My second goal was to craft myself a horse bridle, as walking everywhere can be tedious. Back in those days we didn't get an Old Nag, we had to earn our first horse -- uphill, both ways. Fallen Earth, while not an entirely different game, plays out a bit differently than it did then.

These days, new players are brought up to speed in a more instructive manner. They have a new expanded tutorial and new missions in each starter town to get the players acquainted with crafting and other gameplay subtleties. The game has a steep learning curve, so more instruction for new players was a step in the right direction. But some people just aren't cut out for the grim reality of post-apocalyptic life, no matter how easy you try to make it for them. Being a new player in Fallen Earth used to be pretty rough. Now, starting with a Crude Slugthrower, which is essentially a zipgun rifle that shares ammo with your zipgun pistols, makes things a bit simpler. Couple that with a 200% damage bonus for headshots (with a floating text feedback message) and life isn't as rough as it once was. How different is it today?


The goal of the development team was to make the first few levels of the game more challenging with a starter town re-vamp. But, they undid all their hard work with the massive headshot damage bonus. A critical headshot is usually all it takes to kill a mob of your level, early on. Don't get me wrong, I love to be rewarded for headshots, but it stacks the odds heavily in your favor. In my opinion, they should have left it enabled for PvP (it's a PvE only thing now), because it would have changed the PvP dynamic immensely. Well, it did, for a few hours. Until they hotfixed it.

To see how different the experience was, I started a new character on the Public Test Server recently. The expanded tutorial was very helpful and would have been a welcomed addition for my first run-through. But I persevered and here I am now, looking back on the past six months. The wastelands seem a little less deadly now, but that can be attributed to my familiarity with the game. Aside from that, not much has seemed to change in the fledgling stages of the game.

So if you are a player that shelved Fallen Earth after a few months (there are a lot of you, if my clan roster is any indication) with the intention of revisiting it at some point, I have some good news and I have some bad news.

The good news: It's a much improved, more stable, better-looking game. The bad news: There is still room for improvement.

So how has the game changed in the last six months?

Factions are still ineffectual. Most PvP is clan wars. Faction gear also took a beating, as in many cases it was better than craftable items. The developers intended for crafted items to be the best in the game so faction gear was brought down to a more humble level. You no longer gain stamina while moving (ouch). Also, you can no longer buff yourself up to the requirements for capstone abilities. You must actually possess the natural ability to use these. There is still a lot of balancing issues in PvP, with enough stacking buffs to make Gary Gygax roll over in his grave.

A new rifle skill ability called Agonizing Wound has been added which forces a target's health regeneration to zero for 15 seconds. Though rifle users need some love in the PvP department, this was not it. Its range is woefully short for a rifle ability, and it gets resisted often.

Despite these issues, the most significant PvP improvement was a stun immunity timer. Most players had three or more stuns at their disposal that could be used back-to-back to keep someone stunned for the rest of their life, however short that might be. Now there is an eight second amnesty between stuns. The nerfbat is still hammering away at mutations, trying to get them in line but still keeping them useful. Balancing PvP is still in the works, but given the daunting task that it is, the developers are probably doing it right just a little at a time. Most abilities and mutations are now easier to resist, as base saves have been increased, lending less dice roll luck to the outcome of a fight.

Bunker bars were also added. In addition to having a full bar, the bunker bars sport an array of one-armed bandits and video blackjack machines. What did you expect when society's currency has devolved into poker chips? The machines are said to use "real Vegas odds", and I lose my chips just like I'm really in Vegas -- especially in slots. But if you are a good enough blackjack player, maybe you can make a living from it. Best of luck to you; I'll hold on to my chips until the video poker machines appear. Also take note that only neutral towns, or towns that are friendly to the Traveler faction, have the machines. The bunker bars in Enforcer-run towns are a little less, um... fun.

There have been numerous improvements in small areas that make life in the wastes more bearable. Like the ability to transfer items from pack to mount or vault and vice verse with a click, rather than having way too many windows open and dragging items all over the place. One of the UI modifications that I was happy to see was the addition of the saves to the gear window. Now if we could just get our current health, stamina and gamma regeneration level displayed somewhere, I'd be in absolute bliss.

All vehicles have been rebalanced, and there is more variety between the types. Most vehicles had changes made to them for the better. Vehicle physics have been added, although they are still a bit rudimentary, but they are still a significant improvement over the ground-hugging vehicles we once had. At least now you can jump stuff that is even remotely ramped, like a post-apocalyptic Duke boy. The distance you could fall while mounted before taking damage was increased by 50%. So now, not only can we jump stuff, but it hurts less! The sheer genius of it! Okay, so I like to jump stuff. Hopefully I won't forget not to do it while driving in real life.

The construction skill was added, as well as recipes for camps. For the most part camps aren't all that useful, unless you are a buff-stacking maniac. There are some very useful camps for the scavenger in all of us, the scavenger that is far from any towns or vendors. A few of the more useful camps are the vault and mail drop camps, or the camps that attract a merchant. I know the construction skill is supposed to be the means we will use to construct our dwellings once player housing is introduced, and the camps were a teaser of what was to come, but the camps are far too ephemeral to whet my appetite. They should persist a lot longer.

Despite all this new stuff, there is a rash of players (from what I understand by frequenting the forums) that are on a hiatus and awaiting a particular patch. The game is not where most players want it to be, but they refuse to leave it completely. Fallen Earth does so many things right, but it does -- according to the most vocal players -- many of the end-game related things wrong. I play four characters, the lowest level one being 23, and I feel I have only scratched the surface of the game. I am an exception to the rule, it would seem. Many players zip to the level cap, craft all the best equipment, run every instance and grab every AP which leaves them with one thing to do: PvP. At the moment, there is really no incentive for a Fallen Earth player to engage in PvP combat, aside from its intrinsic entertainment value.

One of the toughest questions I hear asked about people who are unsure of whether they want to PvP or not is "Why?". My answer is "Because it's fun". This usually isn't enough, as they want to know about the rewards they might get. Truthfully, aside from the fact that I enjoy the challenge, PvP is currently pretty thankless. A measure of player's prowess in PvP (in game terms) is Death Toll. It is a point value that increases when you kill someone, and decreases when you are killed. Most people wind up sitting at around zero. Death Toll is a bad game mechanic that needs to be fixed, because as it is now it almost discourages PvP.

The 1.5 patch is being hailed as "The PvP Patch" because it's rumored to be the solution to these problems. A dueling system will be added with the next patch (1.4), and duels will not be to the death, so you have nothing to lose. Unfortunately, just like regular PvP, you will also gain nothing, which isn't really solving anything. Death Toll will also be retooled in 1.5 to become a type of currency. Hopefully the things you can buy with this currency will be worthwhile.

The first major patch that was released gave the end-game crowd something to do, however, the level cap was only raised by one -- to 46. And approximately 50 new missions were added to the new Sector 3 zone called Deadfall Point. This didn't keep them busy for long, and soon thereafter, they were clamoring for something else to do. The patch also added some new, more dangerous content in the southernmost reaches of Sector 1 to give new players an extra challenge. If you ask me, there is already plenty to do in Sector 1, almost overwhelmingly so. If you did every quest in Sector 1 before going to Sector 2, you would be well over level 20 and the end-game problem still persists.

Despite the vocal minority that are sitting at max level looking for something to do, I am finding myself with plenty to do. Slow down and enjoy the ride, and there will be plenty to do. If you are a new player, or considering giving Fallen Earth a try, my advice to you is to take it slow and explore the vastness of the wastelands. If you still can't figure out what to do once you've maxed out every aspect of your Fallen Earth characters, there is the Public Test Server. Hop on that and try out the upcoming 1.4 functionality.

In this article: fallen-earth, fallen-earth-llc, icarus-studios, mmofps, patch, post-apocalyptic, public-test-server, sandbox, wasteland-diaries
All products recommended by Engadget are selected by our editorial team, independent of our parent company. Some of our stories include affiliate links. If you buy something through one of these links, we may earn an affiliate commission.
Share
Tweet
Share