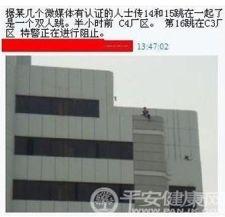 There was more bad news out of China this week -- manufacturer Foxconn (who makes quite a few parts for Apple devices) has been dealing with a rash of employee suicides, as low pay and long hours on the workers seems to be taking their toll. Yesterday, another worker reportedly tried to take his own life [Ed. note: original 9to5Mac link broken], and there are reports of more than 15 other attempts within the plant. Apple has responded, saying that they're working closely with the company to try and solve the issue.

In order to do that, the company claims it's going to raise wages by 20%, although it's not clear yet when or how that plan will be implemented. It also says that some employees will be relocated closer to their homes -- about a fifth of the workforce will be moved to plants closer to their families. Apple isn't alone in helping Foxconn deal with the problem, either -- Sony, Nokia, Nintendo, Dell, and HP all get parts from these factories and are pressuring the company to do better.

Finally, John Gruber points out that as bad as this Foxconn story is, it might not be all that remarkable, unfortunately. Even with the reported 13 suicides, Foxconn has over 800,000 workers, which means the company's suicide rate is below the national average in China, and China is number 26 on the worldwide list. But numbers and averages aside, a death is a death, and everything Foxconn can do to help their employees lead better lives should be worth it.

In this article: apple, companies, daring-fireball, dell, employee, factories, foxconn, gruber, hp, nintendo, nokia, rates, sony, suicide, suicides, wages
All products recommended by Engadget are selected by our editorial team, independent of our parent company. Some of our stories include affiliate links. If you buy something through one of these links, we may earn an affiliate commission.
Share
Tweet
Share