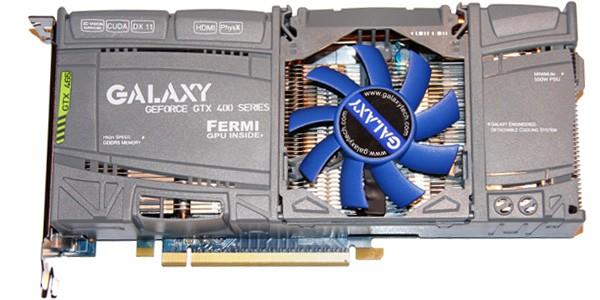 Well, it's not quite June 1, but the GeForce GTX 465 reviews have come flooding out all the same. The official specs are exactly as a recent leak indicated: 352 CUDA cores running at 1,215MHz, a 607MHz graphics clock, and 1GB of GDDR5 memory operating at a 3.2GHz effective rate and exploiting a 256 bit-wide interface. With an MSRP of $279.99, this Fermi-lite GPU scored plenty of admiration for the value it offers, with one reviewer going so far as to call it "quite possibly the most powerful DirectX 11 graphics card for under $300." Others weren't so enthusiastic, citing the far cheaper HD 5830 from ATI as a better choice, but it's true enough that the next best GPU, the HD 5850, tends to be at least $30 more expensive than the 465, depending on brand. You'll want to delve into the game benchmark numbers in order to make up your mind about which card might make for the best bit, but be warned that NVIDIA's 465 retains the GTX tradition of ravenous power consumption -- something to consider if you're rolling along with an old school 400W PSU in your rig.

COMPUTEX-Taipei-May 31, 2010-Showcased as part of the NVIDIA® 3D Revolution press conference held today at the start of this year's Computex trade show, the newest entry to the NVIDIA Fermi™ architecture lineup of consumer GPUs-the GeForce® GTX 465-has officially launched. Available now from the world's leading add-in card partners, system builders and OEMs, with a target price of $279, the GeForce GTX 465 GPU brings a new level of DirectX 11 performance to PC enthusiasts and gamers around the world.

The entire GeForce GTX 400 series of consumer GPUs was designed from the ground up to deliver potent gaming performance with the top-of-the-line GTX 480 delivering up to 8x faster geometry tessellation, than the closest competitive product. The new GTX 465 features 11 dedicated tessellation engines, resulting in outstanding performance at a new price point for GeForce GTX 400 GPUs. Tessellation allows game developers to take advantage of the GeForce GTX 400 series GPUs' ability to increase the geometric complexity of models and characters to deliver far more realistic and visually compelling gaming environments. Combined with support for NVIDIA 3D Vision™ technology, the industry's only complete 3D stereoscopic solution for the new category of 3D PCs, the GTX 465 offers gamers an attractive price point to play the latest cutting-edge titles at full HD, 1080p resolutions.

* Next-generation CUDA™ architecture, the foundation for the world's most open GPU computing platform, with complete language and API support, including CUDA C/C++, DirectCompute, OpenCL, Java, Python, and Fortran for the broadest compatibility with GPU-accelerated applications, including Internet Explorer 9, Folding@home, and others.

"With GeForce GTX 465, now even more gamers can experience what DX11 gaming was meant to be," said Drew Henry, general manager of GeForce GPUs at NVIDIA. "By using these new GPUs to build 3D Vision PCs, these same gamers will truly immerse themselves into the future of PC gaming. We are passionate about building GPUs to make the PC the best platform for gamers!"

The GeForce GTX 465 is available starting today with an estimated retail price of $279 from leading add-in-card companies including ASUS, EVGA, Galaxy, MSI, Palit, PNY, Zotac and others.

In this article: 40nm, 465, benchmarks, directx 11, Directx11, fermi, geforce, geforce gtx 465, GeforceGtx465, gf100, gfx, gpu, graphics, graphics card, GraphicsCard, gtx, gtx 465, Gtx465, mainstream, nvidia, review, review roundup, ReviewRoundup, reviews
All products recommended by Engadget are selected by our editorial team, independent of our parent company. Some of our stories include affiliate links. If you buy something through one of these links, we may earn an affiliate commission.
Share
Tweet
Share