Out of the box concept aims to simplify cellphone instructions 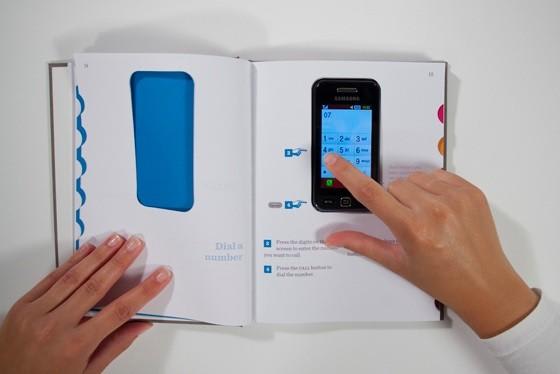 It's not often that someone tries to reinvent the instruction manual, but that's just what Clara Gaggero and Adrian Westaway of Vitamins Design have done in conjunction with the Helen Hamlyn Center and Samsung Design Europe. While they've offered up a number of different ideas, the standout has to be the book concept pictured above, which literally puts the phone itself at the center of the user manual -- just flip through the pages and follow the directions that point right at the screen. Another interesting (but slightly further out) concept is a set of cards that would actually perform a function when touched on the screen (add a contact, record a voice memo, etc), and which would contain instructions on the back so you can eventually learn to do it yourself. Hit up the source link for a peek at that concept, along with a slightly less simple "map" idea that promises to help folks navigate though a phone's menu system.
In this article: Adrian Westaway, AdrianWestaway, Clara Gaggero, ClaraGaggero, concept, instruction manual, InstructionManual, instructions, manual, samsung, Samsung Design Europe, SamsungDesignEurope, vitamin design, VitaminDesign
All products recommended by Engadget are selected by our editorial team, independent of our parent company. Some of our stories include affiliate links. If you buy something through one of these links, we may earn an affiliate commission.
Share
Tweet
Share