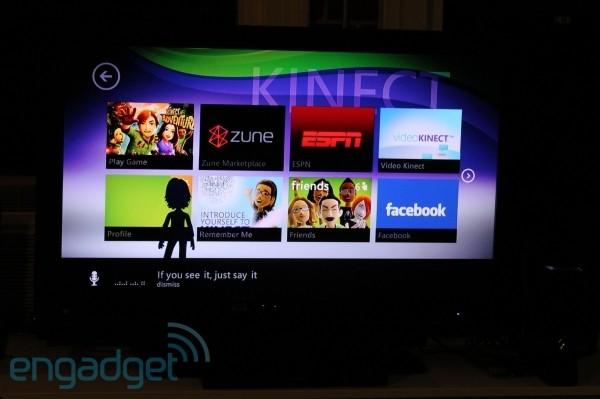 We just got a look at the new Kinect Dashboard-lite for the Xbox 360. In some ways, it's pretty charming, with fun, jazzed up icons (when you hover over them they tilt and show off depth), a simplistic layout, and some great voice controls. The downside is this all comes at the cost of a brand new, fairly redundant interface for accessing functions that are already available with your Xbox 360 controller in the regular Dashboard. Still, there's no denying the joy of waving a hand to log in, hovering over icons to select channels (though the wait-to-click mechanism strikes us as eventually frustrating), and scrubbing through media with very intuitive gestures.

The best part is the voice control, however, allowing you to speak "Xbox" and then a command like play, pause, back, forward, stop, Zune, etc. It's ripe for abuse (pausing your S.O.'s seventh Netflix screening of The Constant Gardner ad nauseam), but Microsoft says it's working on eliminating random commands that might seep into conversation. Our biggest worry is that we're going to see confusion and fragmentation of functionality with the divergent UI requirements that Kinect apps and regular Dashboard apps require -- we can't imagine the Facebook or Last.fm folks being super thrilled at creating an all-new app just to support Microsoft's whims, but we're told just such apps are in the works. Is the existing Dashboard really so complicated that Kinect couldn't control it? Check out a video of this puzzling Kinectasticness after the break. In this article: dashboard, e3, e3 2010, E32010, impressions, kinect, preview, ui, video, voice control, voice recognition, VoiceControl, VoiceRecognition, xbox, xbox 360, Xbox360, zune
All products recommended by Engadget are selected by our editorial team, independent of our parent company. Some of our stories include affiliate links. If you buy something through one of these links, we may earn an affiliate commission.
Share
Tweet
Share