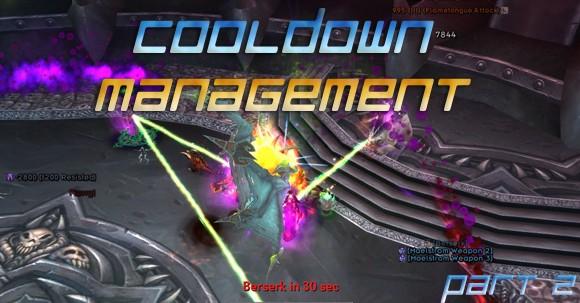 Rich Maloy lives and loves enhancement. Enhance is his main spec, his off spec, and his off-off spec. The other trees are there purely for his amusement. Whatever your shaman's spec, get your questions ready for the Totem Recall shaman roundtable on Raid Warning coming July 13. Send your questions in now to be answered by the top shaman from around Azeroth.

Last week we covered the Lower Spire of ICC and how enhancement shaman (or any damage-dealing class, for that matter) can maximize their cooldown usage. This week we'll use the 25% buff and power-clear the rest of the instance.

Regular and Heroic Another fight where Heroism off the start is the best way to go. The oozes come out faster the lower his health gets, so my theory is to get as much damage on target early on. At the end, things are hectic and too much damage is lost as too many people are running around or dead. You can pre-pot here to have another Potion of Speed available to use later on in combat. An early Hero makes cooldown management easy; use at the beginning and then again at every opportunity.

Regular When to Bloodlust depends on how long the fight lasts in your group. When we were first starting this fight, we would use BL about five seconds before the second Pungent Blight late in the fight to help the healers through the raid-wide damage increase. But if you're tearing through this on regular, then an early Hero may be your best use. Don't time your fire elemental with a late Hero or he won't get used; just bring him out early and let him have his un-lusted fun.

Heroic We definitely save BL for late in the fight before that second Pungent Blight. However, I do pop wolves and ele early on just to get them out; then wolves will be available in time for BL. Use cooldowns as they become available, but keep an eye out for that Pungent Blight cooldown, because you want to save Shammy Rage for it for two reasons: to take less damage and help your healers, and (of course) to time with Bloodlust. Your wolves should be ready for the second BL, but if they're not, it's more important to get the lust out than hold it for the wolves.

Regular I follow this priority: shammy rage on every opportunity; wolves early, then save again for phase 3; fire ele for phase 2; trinkets as available. I find that to be the maximum up-time for pets and special abilities.

Heroic I'm still refining my heroic pet and cooldown strategy; in fact, heroic PP was the impetus for this article. Typically I do the following: SR on pull to ensure it's up again for phase 1.5. Then in 1.5, I use wolves and SR plus any trinkets. In phase 2, I use the fire elemental because it will get the maximum time on target; often the boss will run out of range of the ele in phase 3, thus rendering it useless. Still in phase 2, use SR as available being sure to save it again for the next transition phase. Phase 2.5, I'll again use SR and wolves -- they should be up. However, recently we've been getting the transition phases down quickly, so I'm going to start saving my wolves for the final phase. Finally, in phase 3, I use everything I've got.

If you've done this fight on heroic, you know it's one of the most hectic ones in the game. There is so much damage flying around and so much movement required while you're up against an enrage timer, or a simply an OOM-healer-related tank death.

Regular and Heroic I personally prefer to stand in the back and let everyone else do the work. But on the off chance I'm actually actively participating in the fight, there are two places to pop Hero/BL: either on Keleseth or Taldaram. (It's a waste to Lust on Valanar.) Use BL as soon as the second target gets empowered and blow all your CDs then -- just be sure to not cleave/splash damage on the orbs.

I try to save my SR for Valanar and use the damage reduction component. This is one of the few fights that hates on melee. Another possibility for this fight is to use your wolves on Valanar and hit Spirit Walk for one of the Empowered Shock Vortexes and the SR for another.

Regular and Heroic This fight you have to work backwards from your kill time to maximize the overlap between BL/Hero and as many bites as possible. Usually this means popping off as soon as your last round of bites goes out. If you're butting up against the enrage timer, then you'll definitely get the most out of BL. But if you're getting her down well before, then you may want to get BL out for everyone's sake before the last people are bitten.

As for other cooldowns, I pop one-, two- and three-minute cooldowns at the beginning. I also pre-pot on every pull so I can use another pot at BL. This week with the 25% buff, my wolves weren't up again by the time we popped BL, so I did what any good enhancement shaman would do: asked another shaman to give my wolves BL when they came out. I keep using Shammy Rage throughout the fight but save any two-minute cooldowns for the BL at the end.

Regular and Heroic This is the healer's fight; let them make the call on Heroism. As DPS, we're just the clean-up squad while the healers do the real work, so use cooldowns every time they're up. One thing I find handy here is Spirit Walk if I need to get to a Blazing Skeleton or away from a Blistering Zombie.

Regular and Heroic I use a Glyph of Fire Elemental for this fight. Though I'm not getting maximum time on target for the first use (due to her air phase), I still find it's a good amount of damage, and having it up for phase 3 is awesome to get that extra, constant damage on the boss.

When you BL is a guild's strategic decision. I've done it where we BL early on the initial pull, just to get it out of the way and not have anyone tempted to blow themselves (or, on heroic, the raid) up. We've also done BL after the Blistering Cold (the "suck in") just before she transitions into phase 3. If you time it right, your melee won't have stacks of Chilled to the Bone. This way, you can maximize damage done before the phase 3 madness really starts. Either way, I use all cooldowns as available.

Regular So many phases to this fight this might end up being a long one.

Phase 1 I no longer do this fight with a Fire Elemental Glyph because phase 1 is just a meters epeen phase. If you do your rotations properly, Lichie will move soon enough; let the disease kill the adds. Having said that, I do use my wolves and all of my cooldowns because they will all be back up for when I really want to use them in Phase 2 -- and hey, just because I look down my nose at meter epeening doesn't mean I'm not going to at least have a respectable showing!

Phase 1.5 Continue to use Shammy Rage, just being sure to not pull aggro from the Raging Spirits.

Phase 2 Here is where you want to get the maximum amount of damage on LK and adds to get out of the phase as quickly as possible. I drop my fire elemental here in this phase right as soon as the tanks have LK in position. I save all my cooldowns for the second set of valks, including my wolves. Without fail, the second valks coincide with the second Defile and so the stuns and damage output are much less consistent. This is the hardest part of the whole LK encounter and so save everything you have for now. If you popped your wolves at the pull, they will definitely be up and ready to use for the second valks. Use every cooldown in your arsenal, and Frost Shock liberally.

Phase 2.5 We typically pop BL in this phase to come out of it with only one Raging Spirit still alive. Use cooldowns as they are available.

Phase 3 The same applies here: Use cooldowns at every opportunity. Stay mobile and keep yourself alive.

Phase 4 Please tell me that you are ankhing up before the mass resurrect, popping your wolves, all your cooldowns and Bloodlust! That's why Blizzard gave us Reincarnation: so we can piss off our damage-meter-loving guildmates with our "creative use of game mechanics."

Heroic Unfortunately I have no experience on Lich Heroic, either on 10s or 25s, so this will have to wait for another day.

How do you do things differently than I outlined here? Share so we may learn!

Show your totemic mastery by reading Totem Talk; whether reading Mike Sacco's Elemental edition, Joe Perez's coverage of Restoration or Rich Maloy's Enhancement edition, we have you covered.
In this article: bloodlust, class-help, cooldown, cooldowns, enhancement, Enhancement-Shaman, enhancement-shaman-totem-talk, featured, guide, guide-to-shamans, heroism, icecrown-citadel, icecrown-citadel-raid, icecrown-citadel-raid-guide, shaman-enhancement-totem-talk, shaman-guide, shaman-info, shaman-talents, talent, talents, world-of-warcraft-class-guide, world-of-warcraft-guide, wow-class-guide, wow-class-help, wow-guide, wow-shaman, wow-shaman-info, wow-talent-guide
All products recommended by Engadget are selected by our editorial team, independent of our parent company. Some of our stories include affiliate links. If you buy something through one of these links, we may earn an affiliate commission.
Share
Tweet
Share