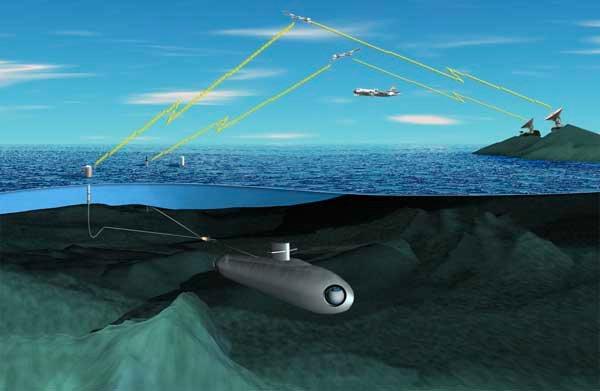 Lockheed Martin has announced that it's completed a critical design review for a system that enables submarine communication while below periscope depth. Part of the US Navy's Communications at Speed and Depth Program, buoys are launched by the sub, which can then connect nearby to military networks or satellites. The 40-inch long buoys can either be launched from the sub itself, shuttling data back and forth via miles-long cables, or dropped from aircraft. If the latter, communications is established using an acoustic messaging system similar to SONAR. Now that the review is complete, the team will begin producing hardware with an eye toward delivering engineering design models early next year. PR after the break.
Show full PR text
Lockheed Martin Successfully Completes Critical Design Review for U.S. Navy's Communications at Speed and Depth Program

MARION, Mass., July 12 /PRNewswire/ -- A Lockheed Martin (NYSE: LMT)-led industry team has completed a successful critical design review for a system that will give U.S. Navy submarines real-time, two-way communications without requiring platforms to proceed to periscope depth. The review clears the way for the team to begin producing hardware and to deliver engineering design models in early 2011.

Currently, submarines must come to periscope depth to communicate with other ships, aircraft or shore facilities. This increases the submarine's detection vulnerability and may result in a large delay in tactical communications. The new system, which can be installed on all classes of submarines, is called Communications at Speed and Depth (CSD).

"The CSD program fills a major gap identified in the Undersea Dominance Roadmap," said Brent Starr, the Navy's CSD principal acquisition program manager. "Successfully completing this review is a key indicator that we have designed a robust family of systems."

Lockheed Martin will deliver three types of two-way communications buoys and associated equipment for installation aboard submarines and ashore. Two tethered expendable communications buoy systems -- for Iridium satellite and ultra high frequency communications -- will be launched from submarines. The third is an acoustic-to-radio-frequency gateway system that can be launched from submarines and aircraft. The $35 million contract was awarded to Lockheed Martin in January of 2009 and includes the production of buoys for development tests and operational assessments.

"The CSD systems will keep submarines connected to the Global Information Grid far beneath the water's surface, helping submariners remain safe and hidden from enemy radars," said Rod Reints, Lockheed Martin's senior program manager for CSD. "Submarines are most vulnerable when they must surface to use communication systems. This program eliminates that vulnerability."

Headquartered in Bethesda, Md., Lockheed Martin is a global security company that employs about 136,000 people worldwide and is principally engaged in the research, design, development, manufacture, integration and sustainment of advanced technology systems, products and services. The Corporation reported 2009 sales of $45.2 billion.

SOURCE Lockheed Martin
In this article: buoy, Communications at Speed and Depth Program, CommunicationsAtSpeedAndDepthProgram, data, defense, lockheed martin, LockheedMartin, navy, networking, sub, submarine, wargadget
All products recommended by Engadget are selected by our editorial team, independent of our parent company. Some of our stories include affiliate links. If you buy something through one of these links, we may earn an affiliate commission.
Share
Tweet
Share